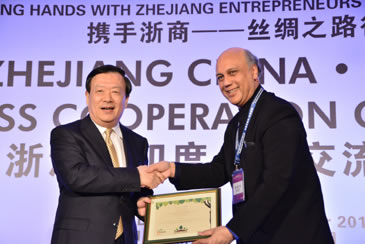 There is a need for the dynamic entrepreneurs of India and China to collaborate, cooperate and deepen the business engagement to conquer the world markets, said Mr. Amitabh Kant, Secretary (DIPP), Ministry of Commerce and Industry, Government of India at the ‘India-China (Zhejiang) Business Cooperation Conference’, organized by FICCI in association with Zhejiang Federation of Industry and Commerce in New Delhi.

At the business meeting organized by FICCI in partnership with the Zhejiang Federation of Industry and Commerce and support of the Embassy of the People’s Republic of China, a high powered 100-member business delegation from China exchanged ideas with their Indian counterparts on how the two countries could further widen and deepen their economic engagement. The emphasis was on providing a roadmap to address the difficulties that have so far inhibited growth in bilateral trade and investment between the two countries.

Memorandum of Understandings (MoUs) worth over $2.4 billion were signed at the conference. Amongst the MoUs signed today, thebiggest is between Kunlun Chuangyuan Investment Co., Ltd. (Zhejiang) and Kiri Infrastructure Pvt. Ltd. (India) for the project ‘India International Trade Center in Gujarat’ worth USD 1500 million.

Mr. Kant said that India excels in software and IT development and China’s growth can be attributed to its manufacturing sector. By collaborating on the two sectors, there was scope for advanced manufacturing and the two nations could penetrate the world market with the unique mix.

He stated that, at present, India faces a trade deficit which is an unsustainable situation and cannot continue for long. With an open up business environment, Chinese companies should invest and set up businesses in India to bridge the trade deficit.

Mr. Sidharth Birla, President, FICCI and Chairman, XPRO India Ltd., said, “We are happy that China has acknowledged that trade deficit is a matter of concern to us; our five year trade and economic cooperation pact is geared to addressing this. Market access issues faced by our firms in sectors like pharmaceuticals, IT and agricultural products should get resolved with renewed effort from China to import value added products from India.” 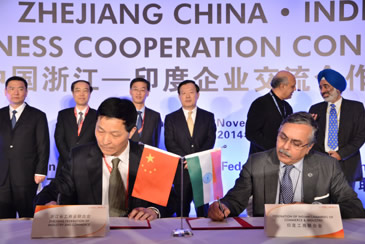 He informed that on the sidelines of President Xi Jinping’s visit, FICCI had organized an India-China Business Meeting with the support of Ministries of Commerce on both sides, and Chinese companies signed buying orders for about US$ 740 million. A notable development was the agreements for setting up of Chinese industrial parks in India. Two agreements worth nearly US$ 7 billion were signed for Gujarat and Maharashtra. Mr. Birla added that FICCI looks forward to and was ready to support the goal set by Prime Minister Modi which is ‘INCH (India-China) towards MILES (Millennium of Exceptional Synergy)’.

Mr. Yao Jing, Chargé d’Affaires, Embassy of the People’s Republic of China, said that the India and China have promoted trade and commerce since ancient times and now under the able leadership of Prime Minister Narendra Modi, India is set to develop and prosper. He added that concrete business relations must be forged for the betterment of lives of people.

Mr. Xia Baolong, Party Secretary of Zhejiang Committee of the CPC, Chairman of the Standing Committee of Zhejiang Provincial People’s Congress, said that India and China had emerged as one of the destinations for FDI and China was also encouraging its businessmen to invest in India to balance trade figures.  However, he added that people to people exchange was critical to enhance relations between the two nations.

Mr. Nan Cunhui, Member of the Standing Committee of the Chinese People’s Political Consultative Conference, Chairman of Zhejiang Federation of Industry and Commerce, Board Chairman of CHINT Group, said that there were immense opportunities for cross border trade and there was a need to promote bilateral trade further. He added that China could help India in leveraging its manufacturing sector and India could assist China in IT and pharmaceuticals.

Mr. Jack Ma, Executive Chairman, Alibaba, who captured the world stage with the record-breaking $25 billion initial public offering of e-commerce powerhouse Alibaba Group on the New York Stock Exchange, while addressing the business conference said that Indo-China business cooperation had a lot of potential and he was hopeful of closer business ties between Indian and China and more Indian vendors selling products to Chinese users via Alibaba.

He said that India is a great nation with many young people and has great products that can sell through his platform in China. Right now it’s a wonderful time for India and China to do business, particularly after the visit Chinese President to India. “We will improve our platform and technology in the future. Internet is changing the world and Internet will change India too,” Mr. Jack Ma added.