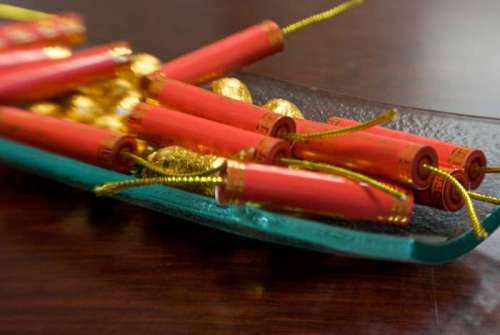 It may not be a cracker of a Diwali this year for about 500,000 families in Tamil Nadu’s Sivakasi town – India’s biggest firecrackers manufacturing hub – as they fear getting swamped by Chinese firecrackers.

“Two years back the illegal imports of Chinese firecrackers were sporadic. But this year it was phenomenal, threatening the domestic industry’s very existence,” G. Abiruben, president of the Tamil Nadu Fireworks and Amorces Manufacturers Association (TNFAMA), Sivakasi,said over phone.

“Nearly 35 percent of the products made for this year’s Diwali remain unsold because of clandestine imports of several container loads of Chinese products,” he said.

Chinese firecrackers pose a threat to the Rs.6,000 crore Indian firecracker industry which is gearing up for Diwali Oct 23.

Conservatively, industry experts estimate that the value of clandestine imports of Chinese firecrackers is around Rs.600 crore for about 2,000 containers.

The central government has said that advertisements would be issued in the dailies warning of action against illegal imports of firecrackers, but no such publicity has been given till date though the time is running out, industry officials complain.

K. Mariappan, member of senior advisory committee, TNFAMA, told IANS: “Earlier the central government used to seize container loads of Chinese firecrackers. Instead of destroying the seized products they were given back to the illegal importers after levying a fine. Those products later found their way into the market.”

He said the chief controller of explosives based in Nagpur has to give the sanction to destroy the seized fireworks and no such sanction has been given till date.

Sivakasi, also known as ‘kutti’ or ‘mini Japan’, is one of the oldest and biggest firecracker manufacturing hubs in India. Nearly 90 percent of the country’s fireworks are made in Sivakasi. Also, 80 percent of the safety matches are made here.

Low rainfall and dry climate are conducive for this industry to thrive. Some of the products are also used by the airports to scare away birds.

According to Mariappan, imports of firecrackers need licence from the central government. And no import licence has been issued till now to anybody.

The Indian industry realised the seriousness of the Chinese threat when their order intake came down drastically around November-December of 2013.

“Normally orders are placed around that time by distributors. Orders for this Diwali came down drastically as compared to 2012,” Mariappan said.

The orders for next Diwali will be taken during this November-December and industry officials feel that only when the central and state governments start cracking down on illegal imports would the domestic industry survive.

Mariappan said: “The Indian industry has been fully meeting the domestic demand and the imports from China are not to meet the excess of demand over supply. It is mainly to take advantage of the cheap Chinese products.”

He said the use of potassium chlorates while making firecrackers is banned in India, whereas no such ban exists in China.

“We use potassium nitrate (price Rs.70/kg) and aluminium powder (Rs.250/kg) whereas the potassium chlorates used by the Chinese costs just Rs.25/kg. This gives huge price advantage for the Chinese products over ours,” Mariappan said.

Additionally, the Indian manufacturers have to pay excise and sales tax adding to the products’ cost. As a result, the price of Indian products is higher by around 40 percent.

According to Abiruben, firecrackers made with potassium chlorates are friction sensitive and have to be handled very carefully.

“Our products have to comply with the noise pollution levels and also the packaging rules. Our packets should specify the maximum retail price, the phone numbers in case of any emergency and usage methods whereas no such stipulations are there for Chinese products,” he said.

Mariappan said containers with Chinese firecrackers come into India through different points like Navi Mumbai, Tuticorin and others. The Chinese products are targeted at the Gujarat, Maharashtra, Punjab and Delhi markets on which the Indian industry is largely dependent.

Queried as to the type of firecrackers that are illegally imported into India, he said mostly it is aerial shots and children products that are brought in.

“If other products are allowed to come in, then the domestic industry will be wiped out,” he added.

According to Abiruben, the Indian fireworks industry is entirely home grown and there are around 60 ancillary sectors that are dependent on this industry.

The firecracker industry in China is around Rs.30,000 crore catering to domestic as well as export markets.

“We can export our products but our ports do not accept firecrackers as storage facilities are not sufficient. While the Indian gates are open for illegal imports, the gates are closed for legal exports,” Mariappan added.