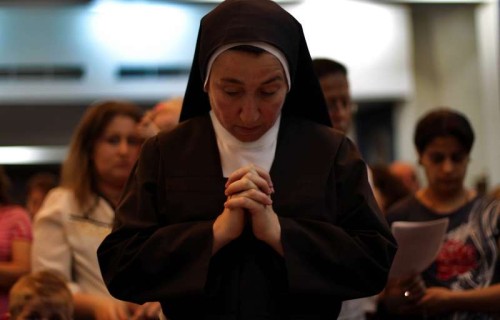 The recent upsurge in violence in Iraq has led to a major new humanitarian crisis with more than 1.45 million people forced to flee their homes since the start of the year, many of them from persecuted religious minorities including Yazidis, Shabak and around 100,000 Christians.

Following the launch of a Christian Aid crisis appeal  our long-standing partners in the region are responding with food, hygiene kits and other humanitarian essentials for the displaced.

Christian Aid Director David Pain said: “We condemn all discrimination or attacks on the basis of identity – both in Iraq and here in our own communities.

“While there have been attacks which have targeted minorities such as Christians and Yazidis in recent weeks, all Iraqis are under threat and people from all communities in Iraq are suffering from the violence.

“All civilians have the right to protection, as set out in international law, including where people are at particular risk for practising their right to political expression and freedom of religion.

“We call for the international community to recognise the need to provide assistance, including emergency relief, to those affected by the crisis; and to support processes that ensure all voices in Iraq are included in decision-making.

“All parties to the conflict have a responsibility to protect civilians and we call for an end to impunity in this crisis.

“Christian Aid partner organisations are providing food baskets containing items such as rice and cooking oil while one partner, REACH, is distributing non-food items, such as hygiene kits, blankets and mattresses to families who have arrived in the northern city of Sulaymaniyah and its surrounding areas.

“They have also been distributing food and bedding to families sheltering in the local Church of the Virgin Mary. Sulaymaniyah has already received approximately 100,000 internally displaced people and there are fears that this number could rise if the advance of Islamic State militants continues.

“Today’s crisis marks a sad chapter in the history of this nation. Christian Aid first started work in Iraq in the early 1990s, initially in response to the impact of the attacks against the Kurdish population in the north and the crisis emerging after the Gulf War.

Since then we have developed long-standing relationships with partners in the region, regardless of ethnicity or faith, to provide access to basic services such as sanitation, water and health that continue to affect the lives of millions of people across the country.”

Iraq is home to 9% of the registered Syrian refugees in the region and this number is projected to rise to 550,000 by the end of the year.

While local communities are doing the best they can to help refugees in settlements, they are seriously overburdened. Many refugees still struggle to meet basic needs and provide for themselves.