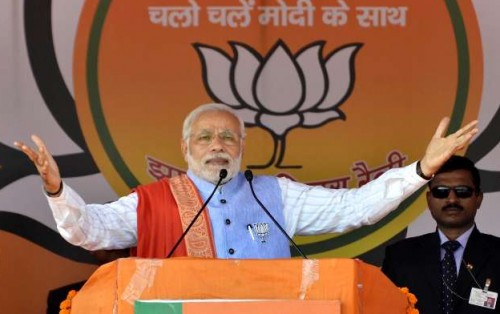 Prime Minister Narendra Modi  asked officials to fast track implementation of a mega irrigation scheme and also instructed the water resources ministry to identify river-interlinking projects that could be taken up immediately.

Chairing a high-level meeting involving the agriculture, water resources and rural development ministries, the prime minister instructed them to fast track the Pradhan Mantri Krishi Sinchai Yojana (PMKSY), which was announced by Finance Minister Arun Jaitley in his budget speech and aims at providing irrigation facilities to every farm.

Modi also said that the Mahatma Gandhi National Rural Employment Guarantee Act (MNREGA) can be integrated with the overall plan for PMKSY.

An official statement said Modi has “called for a multi-pronged approach to the ultimate goal of providing irrigation for every farm through the Pradhan Mantri Krishi Sinchai Yojana”.

“At the macro-level, the prime minister asked the ministry of water resources to identify river-interlinking projects that could be immediately taken up,” the statement said.

The prime minister also called for comprehensive mapping and identification of water bodies across the country and suggested that satellite imagery and 3D photography could be used to guide villages to the best possible sources of irrigation.

Noting that MNREGA had been used over the past few years for creation and augmentation of irrigation assets, Modi said that MNREGA should be integrated with the overall plan of PMKSY.

He also called for precise monitoring of outcomes in this regard.

“The prime minister has asked concerned departments to look into the possibility of identifying progressive farmers, who could take the lead in implementing water conservation and innovative irrigation techniques,” the statement said.

He also called for integrating water recycling projects of key towns and cities with irrigation in nearby rural areas and “emphasized the importance of generating consciousness among people towards water conservation”.