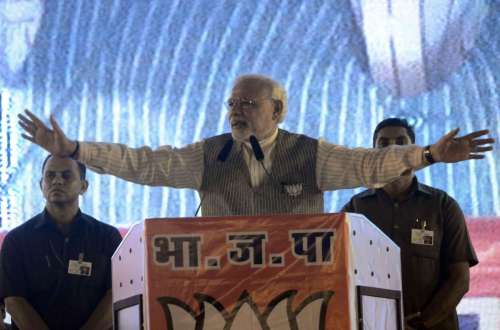 Prime Minister Narendra Modi said the finger which presses the electronic voting machine (EVM) is much stronger than the one that operates an AK-47.

Commending Jammu and Kashmir voters for their huge turnout in the third phase of assembly elections, Modi said at an election rally in Samba district: “Even you have the power, the power to press a finger (on the EVM), and the strength of your finger is much more than one on an AK-47.”

“And this is why, I have come today (Monday) to appeal to you to have a majority government in Jammu and Kashmir, a BJP (Bharatiya Janata Party) government…We all are one and we have to take a new politics of development ahead,” he said.

“There is only one mantra – vikaas (development) – which will provide the youth with employment opportunities,” he said.

Urging the crowd to elect a strong and stable government, Modi assured the large, cheering crowd that he will return the love showered on him with interest, through development.

Modi arrived in Jammu Monday on a day-long visit to campaign for the BJP in the state assembly election.