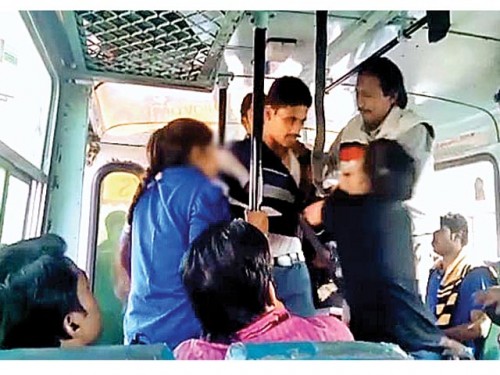 Two braveheart sisters who took on their tormentors in a moving bus as they were being molested and assaulted made it to national, and even international, headlines from Haryana’s Rohtak town. But in the same place, there were two other teenaged girls who, unable to bear their harassment, ended their lives just over three months back.

Both incidents and some more actually expose the rampant stalking, harassment and societal admonishment that girls from Haryana face from the largely patriarchal society.

Teenagers Nikita and Madhu, both of who were bright students and had dreams to go to the US, ended their lives August this year after consuming poison-laced juice.

In their separate suicide notes, running into six and four pages, the girls clearly mentioned about the shame and harassment they faced by constant stalking by men and boys when they went for their coaching classes. They even named their tormentors along with details of vehicle numbers.

The deaths of these girls neither shook the national media nor the system and the administration to the larger problem of uncurbed harassment and stalking.

But the reaction from the two college-going sisters, Aarti and Pooja, to three youth who harassed, molested and assaulted them last Friday in a moving Haryana Roadways bus while other passengers and the bus staff remained mute spectators has shaken a lot of people.

The video of the two sisters bravely taking on the youth and attacking them with a belt, hands and legs as they were themselves being assaulted, went viral after a fellow woman passenger shot it for them.

“It was not a one off incident. We face eve-teasing, stalking and harassment from boys and men everyday – from the bus stop to the bus and at other places,” Aarti told IANS in the midst of several interviews that both sisters have been giving to TV channels and media organizations since Sunday.

“Like earlier, even on the day of this incident, people inside the bus, instead of helping us, told us to calm down and ignore the lewd gestures and comments. One of them said that these boys are like this only and we should not react. He said that if we react, the boys will rape us, throw acid or beat us up. Despite all this, we said that enough was enough,” Pooja said.

“We have always taught our daughters to stand up to any wrong-doing against them. I am proud for what they have done,” said their father Rajesh Kumar.

Rohtak district police chief Shashank Anand said that the case of all three accused, who are in judicial remand, would be referred to a fast-track court for early decision.

These are not just two incidents from Rohtak, the home town of former chief minister Bhupinder Singh Hooda.

In May 2012, motorcycle-borne youths threw acid on a junior national volleyball player, Ritu Saini, 17, in Rohtak. The victim, a class 11 student, suffered burn injuries on her face, arms and chest.

In June 2011, two bikers threw acid on three girl students, when they were on their way to homes after their tuition classes.

“While girls face harassment and stalking from young men and boys, many of them try to ignore and suffer and don’t complain to police,” Seema Dahiya, another college student, told IANS.