The conflict in Gaza has flared up with renewed rocket fire and air strikes as talks in Cairo aimed at forging a durable ceasefire in the six-week war broke down. A woman and a two-year-old girl – reported to be the wife and child of Mohammed Deif, Hamas’s military chief, whom Israel has wanted to eliminate for years – died in an air strike on a house in Gaza City on Tuesday evening. A third unidentified person was also killed and at least 15 people injured, a guardian report said. 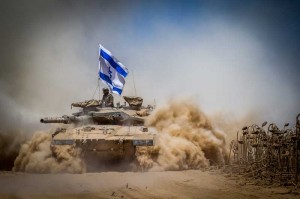 “Seven members of one family, including a woman and three children, were killed when a house in central Gaza was hit early on Wednesday. The offices of the Hamas-affiliated al-Aqsa TV were also hit in at least 60 air strikes following the breakdown of the ceasefire. Hundreds of civilians fled their homes for UN shelters,” the report said.

“Israeli officials said 70 rockets were fired from Gaza, the first of which were launched around eight hours before the truce was due to end at midnight. Hamas denied firing the first rockets but, following the deadly attack on the Gaza City house, it said it had fired at least 40 rockets, targeting Tel Aviv and Israel’s main international airport, Ben Gurion.

“Iron Dome, Israel’s vaunted anti-missile defence system, was reactivated, sirens sounded in the centre and south of the country, and bomb shelters within 50 miles (80km) of the Gaza border were reopened.

“The Israeli prime minister, Binyamin Netanyahu, ordered his negotiating team to leave talks in Cairo. “The Cairo talks were based on an agreed premise of a total cessation of hostilities,” said the Israeli government spokesman Mark Regev. “When Hamas breaks the ceasefire they also break the premise for the Cairo talks. Accordingly the Israeli team has been called back as a result of today’s rocket fire.” It was not clear whether the team would return,” the report added.

Palestinian negotiators also left Cairo, blaming Israel for their failure. “Israel thwarted the contacts that could have brought peace,” said chief Palestinian negotiator Azzam al-Ahmed. The Palestinians had presented a final set of demands, but Israel was “trying to impose what they want. This is impossible for us as Palestinians to accept that … the process of procrastination and stalling continues.”

The UN secretary general, Ban Ki-moon, issued a statement condemning the breakdown of the ceasefire, adding he was “gravely disappointed by the return to hostilities” and urging the sides not to allow matters to escalate.

“Gaza had been relatively quiet for the previous eight days under two successive ceasefires that allowed negotiations to proceed. A third 24-hour-long ceasefire – due to expire at midnight on Tuesday – was agreed in Cairo late on Monday night. It was unclear whether the renewed military action heralded a return to full-scale war or if the latest exchanges would be contained,” it added.