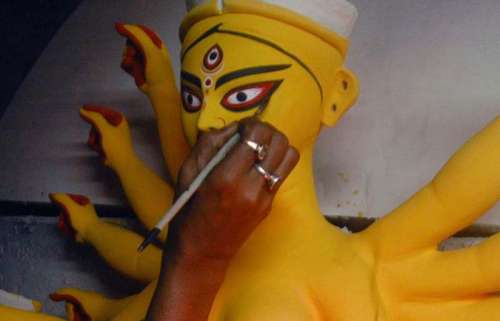 In a unique concept marrying art and science, Kolkata will, in this Puja, host a digitally sculpted goddess Durga and her family, courtesy the application of 3D printing technology on paper.

As 3D printing diversifies across the world in fields of medical science, films, art, aerospace, architecture and design and even in organ regeneration, a Durga puja committee in south Kolkata has paved the way for introduction of hi-tech features in sculpting idols instead of the traditional, manually-crafted process using clay.

In the simplest term, 3D printing involves the creation of a three-dimensional solid object from digital designs or models, in this case, created by sculpting apps. This gives an impression of depth and makes it look as if the figure is jumping out at you.

“We have digitally created a Durga idol, designed by sculpting apps and using 3D printer, which uses standard office stationery (A4 size paper) to make the models from the design.

“So you may say that this is a computer-aided design (CAD)-computer aided manufacturing (CAM) process,” Ujjal Mitra, director of Printz Worldwide, the brainchild of the project, told IANS .

It is pegged to be the world’s such idol, “as far as making of a Durga idol is concerned”, he said.

The relevance of this innovation is that digital models can be replicated multiple times using a variety of materials and 3D printers anywhere in the world, and the process will help the craftsmen too, said Mitra.

“So we are trying to open up an opportunity for the traditional craftsmen to learn this skill and gradually switch to digital work…. maybe next time they would not need to physically transport a Durga idol for all out-station orders, but send the ‘design’ to a 3D printer nearest to the client and have it printed out there,” Mitra said about the cost-effective process.

These virtual designs are translated to solid life-size objects via 3D printers that compose the entire figure layer by layer (additive manufacturing).

Prior to feeding the virtual design file into the 3D printer, a separate programme slices the design or model into layers that are in effect two-dimensional (2D) or sans depth.

The 3D printer reads the 2D image slices and blends in all the layers seamlessly to fabricate an advanced form of art.

Mitra pointed out the method not only permits greater flexibility in terms of creativity but also allows designers to “undo” an anomaly and retrace a few steps to start all over again, something which can’t be done with normal sculpting.

While the makers are yet to zero-in on a colour scheme, white is the choice as of now. The cost of the idol, including paper, glue, etc., hovers at around Rs.60,000.