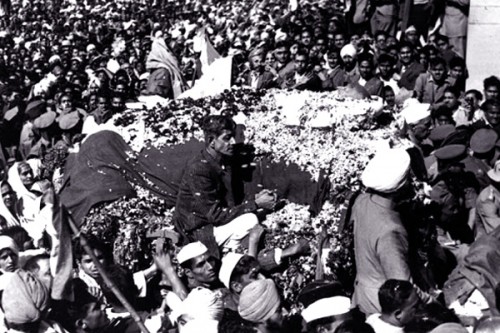 The Rajya Sabha witnessed protests by opposition members on the issue of Mahatma Gandhi’s assassin Nathuram Godse being eulogised in Maharashtra, leading to the house being adjourned twice, but the government made it clear that there was no question of supporting any such move.

The issue was raised by Congress MP Husain Dalwai who said he had also written to Maharashtra chief minister on the issue.

“Nathuram Godse ‘shaurya divas’ (bravery day) is being observed in Maharashtra,” he said, alleging two legislators were also in the list of invitees.

“They are deliberately observing the ‘shaurya divas’ of the man who killed Father of the Nation. There was forced conversion in Agra, and now this…,” Dalwai said, alleging that groups associated with ruling Bharatiya Janata Party (BJP) were responsible for this.

The issue also figured outside the house with BJP MP from Unnao Sakshi Maharaj creating a controversy with his remarks that Godse was a patriot but retracting his comments later.

In the Rajya Sabha, members from other opposition parties joined Dalwai leading to a ruckus.

Some members also trooped near the chairman’s podium, raising slogans against the government.

An angry Minister of State for Parliamentary Affairs Mukhtar Abbas Naqvi said the government is not supporting the killers of Mahatma Gandhi in any way.

“This kind of language is unacceptable,” Naqvi said.

As the protests continued, Deputy Chairman P.J. Kurien adjourned the house till noon.

When the house met again for question hour at noon, the ruckus continued, forcing another adjournment for 10 minutes.

After the second adjournment, Congress leader Anand Sharma said he was certain the government will not support killers of Mahatma Gandhi, and added that the whole house shall speak in one voice on the issue.

“Opposition also wants the house to function. Government will never approve of eulogising of the assassins of Father of the Nation… Let the house speak in one voice. We must condemn it as one house,” he said.

Parliamentary Affairs Minister Venkaiah Naidu said there is no question of eulogising Godse.

Sentenced to death on Nov 8, 1949, Godse was hanged a week later – becoming the first man to be executed in independent India. Along with him, Narayan Apte was also hanged for plotting the assassination.