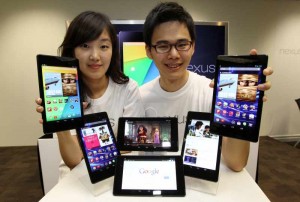 Google has announced that its new Android operating system, Lollipop, is set for release , and also presented new models of Nexus products to compete with Apple.

The new operating system represents a big step forward on account of its new design and characteristics, the company said Wednesday.

“Lollipop is our largest, most ambitious release on Android,” Google affirmed, adding that the latest upgrade of Android has been designed to be flexible and work in all different devices.

The new smartphone Nexus 6, the tablet Nexus 9 and the Nexus Player console are similarly priced or are slightly cheaper than those of Apple, marking a change in Google’s earlier strategy of selling its products much cheaper than its rival.

The Android operating system is available in devices belonging to different brands, unlike Apple’s iOS.

Google said in its blog that the decision to keep its operating system open allows all kinds of users to innovate “together and faster” than ever.

According to the Strategy Analytics firm, 85 percent of all mobile devices in the world use an Android operating system.

Google announced that pre-orders for their Nexus products would begin Oct 17, while the devices would be available in stores from Nov 27 onwards.

The Nexus 6 is a little larger than the iPhone 6 Plus and is expected to be priced at $649, against the $749 price tag of the Apple product.