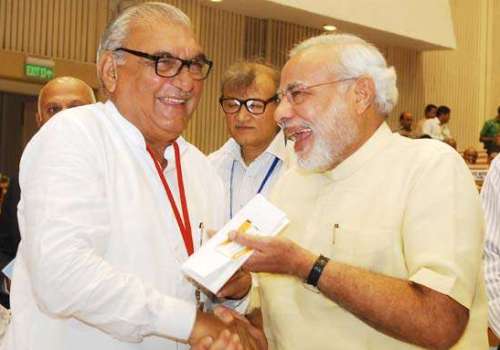 It may not have been a deliberate move to link it with Narendra Modi’s ascent from a tea-vendor to being the prime minister, but Haryana Chief Minister Bhupinder Singh Hooda Wednesday started his day from a roadside tea-stall in Haryana’s Rohtak town and within minutes was taking on Modi.

“I have not seen a prime minister coming and campaigning so much in a small state like Haryana. He addressed nothing less than 11 rallies. It looked as if he was trying to become the chief minister of Haryana,” Hooda said here after casting his vote.

While Modi led the BJP campaign in the state from the front, the Congress largely relied on Hooda. Congress president Sonia Gandhi and vice president Rahul Gandhi could not match up to Modi in holding rallies.

Hooda, with some close aides, stopped his motorcade at a roadside tea stall here and had tea.

The chief minister, who is taking a shot at a third term in office, having ruled Haryana since March 2005, said that some leaders had stooped to a new low in political discourse during the run-up to the assembly polls for 90 seats in Haryana.

“Some leaders stooped very low in this election. I can only say that we upheld the grace in politics,” said a clearly upset Hooda.

The Hooda government was at the receiving end from the BJP and the Indian National Lok Dal (INLD) for land scams and large-scale corruption allegations. Hooda and the Congress are facing an uphill challenge in this assembly election with the BJP and INLD clearly in the lead over the Congress.