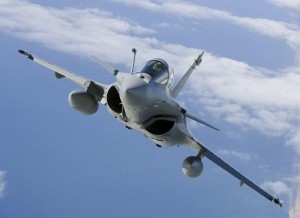 India’s negotiations with French aviation major Dassault for 126 Rafale Medium Multi Role Combat Aircraft (MMRCA) for $20 billion “are progressing well” and the contract is likely “sooner than later in the current financial year (2014-15)” a top military commander has said.

The Indian Air Force (IAF) chief, Air Chief Marshal Arup Raha, in an interview to India Strategic (www.indiastrategic.in) ahead of the Farnborough Air Show, the first in fact after he assumed office about six months ago, was candid enough to acknowledge that the force will have to retire several legacy squadrons of MiG-21 and MiG-27 aircraft in the coming years but he was also confident that the planned induction of the Rafale, and HAL’s indigenous Tejas Light Combat Aircraft (LCA) will help “arrest the drawdown in the strength of the fighter squadrons.”

The number of Su-30MKI aircraft is also steadily increasing. The IAF has planned induction of 272 Su-30MKIs, periodically upgraded, and nearly 60 per cent of them are operational.

The IAF’s proposed strength for combat aircraft is 42 squadrons, to be reached by 2022. Because of the phasing out of the old aircraft like MiG-21s and MiG-23s, the current squadron strength is reported to be 34.

Air Chief Marshal Raha expressed confidence and observed: “Early induction of LCA and MMRCA has been planned for arresting the drawdown in the strength of fighter squadrons…. IAF is likely to have its sanctioned strength of combat squadrons operational sooner than later.”

On the urgent requirement of combat aircraft though, he pointed out: “The MMRCA CNC (Commercial Negotiations Committee) is presently negotiating various aspects of the contract with the L1 vendor, Dassault Aviation of France. The negotiations are progressing well. The contract for 126 MMRCA is expected to be signed sooner than later in the current FY 2014-15.”

According to the report, published in the current edition of India Strategic, he pointed out that as the Rafale induction was in accordance with the Defence Procurement Procedure (DPP) 2006, “Transfer of Technology (ToT) is not eligible towards discharge of ‘Offset’ obligations” but that the latest “revised offset guidelines permit greater flexibility for discharge of offset obligations.”

As for the Rafale induction, there is progress towards early finalisation in discussions. According to Ministry of Defence (MoD) sources, a few subcommittees are working to fine tune details towards the contract, and this should not take very long.

The big issue was the agreement between the vendor, Dassault International, and HAL which is the prime integrator for the project. HAL has negotiated more than 70 percent work share for itself although Dassault was initially hesitant to agree as there were doubts about the state-run company’s credentials in meeting production timelines. Delays can result in penalties for the French vendor. Nonetheless, this issue is resolved.

IAF had contracted for 10 C-17s. Five of these are operational from their base near New Delhi while the remaining five are due to be delivered within 2014 as per the contract.

He was also upbeat on the paradigm shift that C-17 and the C-130J Super Hercules had brought about “in our airlift capabilities.” IAF had inducted the first C-130J aircraft some three and half years ago and another six of these Special Operations aircraft are due to be added in 2016, he disclosed.

Air Chief Raha said: “The induction of C-17 and C-130J has brought about a paradigm shift in our airlift capabilities. The exceptional capabilities of the C-17 aircraft have enhanced our strategic footprint which impacts the concept of Strategic Airlift Operations. Though the process of operationalising the fleet is still in progress, it has already displayed potential by undertaking operations in support of the UN Mission in Congo and the Government of Tajikistan.

“The C-130 has flown with us for three and a half years and has emerged as a significant enabler for Special Operations, besides being extensively deployed for varied tasks. More importantly, these platforms have significantly enhanced our responsiveness in carrying out HADR (Humanitarian and Disaster Relief) operations.”

“Net centricity, cyber security, and ensuring requisite communication bandwidth for seamless operations are also part of this capability. Space is increasingly being integrated into our day-to-day operations to give us the winning edge in any contingency. In order to absorb these new capabilities more efficiently, a time-bound and comprehensive infrastructure upgrade plan has been instituted.”