India has the right to reprocess the spent nuclear fuel (SNF) from the Russian built Kudankulam Nuclear Power Project (KNPP) by a supplementary agreement with Russia, which relieved the builders from the responsibility to take over the discharged SNF as originally envisaged. 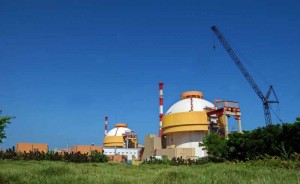 This was stated by A.Y. Khaperskaya, senior manager with Russia’s state nuclear corporation Rosatom, at the Atomexpo 2014 – the sixth international nuclear energy conference that was inaugurated here Monday.

“India has its own plans for spent fuel processing, so we do not figure in it. Instead, with Iran we have an obligation on taking care of spent nuclear fuel”, Khaperskaya told reporters here while responding to a question on KNPP.

She was speaking at a conference session of Russia’s experience in management of SNF and radioactive waste.

India’s department of atomic energy justified the change from the perspective that SNF is not a waste, but is a resource which could be reprocessed for separating plutonium and uranium and can be utilised in a closed cycle to generate more nuclear power.

However, this drastic change made by the supplemental agreement provoked public interest pleas before the Madras High Court seeking a fresh environmental clearance as the one granted in 1989 was based on the original agreement stipulating that all SNF would be sent away to Russia, which the court dismissed.

Khaperskya explained that Rosatom was currently in the process of creating a state of the art processing plant that can treat different types of SNF, that would also obviate the need for collection of the spent fuel.

Only a small percent of the spent fuel can be used for reprocessing, leaving the problem of waste disposal. Towards this end, Russia is experimenting the final burying of waste in an underground laboratory and geological surveys are also being conducted, said A.N. Dorofeev, head of Rosatom’s project for SNF and radioactive waste management.

Currently, only a handful of countries like Finland, Sweden and Germany practice underground burial of nuclear waste.

In the US, courts have disallowed extending the storage period for SNF at the plants from 30 years to 60 years beyond the expiry of their licenses on grounds that SNF stored on-site poses a dangerous, long-term health and environmental risk.