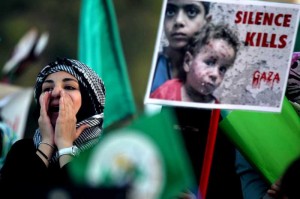 ndia has said that as a founding member of the Non-Aligned Movement (NAM) it has always supported the cause of Palestine and its commitment to the Palestinian cause has been a feature of its foreign policy.

Sushma Swaraj said India believes that the solution to the Palestine issue “should be based on the relevant UN resolutions, the Arab Peace Plan and the Quartet Roadmap resulting in a sovereign, independent, viable and united state of Palestine within secure and recognized borders with Israel”.

She said India welcomes the ceasefire between Palestine and Israel and “calls upon all sides to exercise maximum restraint and avoid taking any action that may lead to violation of present ceasefire and work towards a comprehensive resolution of the Palestinian issue. India remains firmly convinced that dialogue remains the only viable option that can effectively address the issue”.

“We are concerned at the violence by non-state actors in the region which have the effect of serving as avoidable obstacles to the peace process, as well as to the realization of the legitimate aspirations of both the peoples to co-exist in peace and security,” she emphasised.

India has been extending technical and economic assistance to Palestine in the form of humanitarian relief, development projects, establishment of educational institutions, budgetary support, training of Palestinian officials.

“Additionally, India contributes US$ 1 million annually to United Nations Relief and Works Agency (UNRWA) for Palestinian refugees in the Near East. Jointly with Brazil and South Africa as partners in IBSA, India is implementing developmental projects in Palestine. India is committed to continue with its support for the development and nation-building efforts of Palestine,” she said.