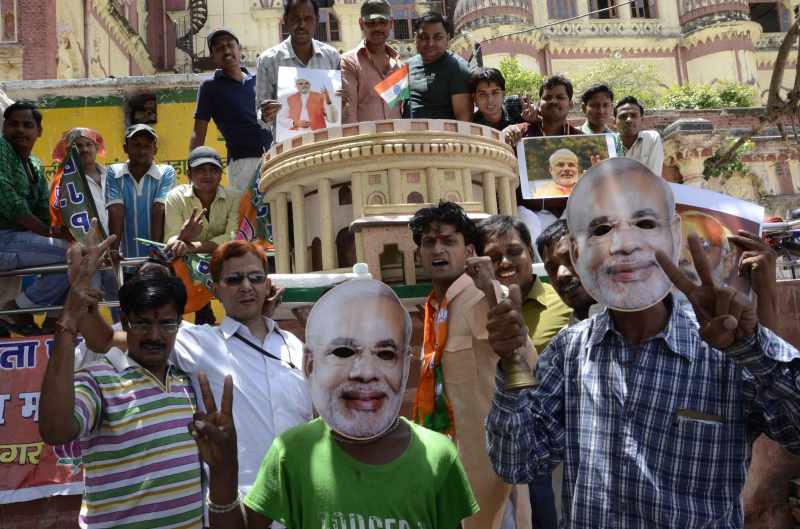 Now that the din of the elections is over it is hoped that the parties and their supporters will come out of their blues of defeat and euphoria of victory, as the case may be.

They should now get down to serious business in a rational and objective manner. A very important issue to be discussed the way our democracy is going. Elections are the very basis of this democracy and any deficiency in the electoral process will have profound effect on the type of government we get. When a country has conducted such a huge; seemingly successful exercise those who call for introspection are generally labeled as cynics and professional critics especially by those who have reaped the benefits of these flaws. The present write up is not intended to deny some of the facts but to improve the system. No one can doubt that the BJP rode on a wave of massive goodwill, hope of good governance and the monumental failures of the previous regime. The careful and sustained projection of one person as a go getter, no nonsense leader unencumbered by any attachments or liabilities paid its dividends.

The uniqueness of the Indian democracy is pointed out through the oft repeated cliché that even a “chaiwala” can become the Prime Minister of the country. Such positive projections help sustain systems but if we become blind to the flaws of the system we will not be able to improve upon it. Therefore it is time to introspect. It is time to change some rules of the game so that a level playing field is available to all sections of society.

Apart from being remembered as one of the most decisive mandates, the present election will be remembered as one totally devoid of issues. Instead of being informed about the deficiencies of the existing system and the road map for course correction, the electorate was bombarded with slanders, accusations, bombastic boasts and empty rhetoric. Tall claims were made about reaching the destination but no roadmaps were discussed. Unfortunately, instead of asking questions on thie roadmap the media played along like cheerleaders.

People were asked to drown in the sea or go to Pakistan if they went for or against someone while some expressed their desire to put some behind the bars. Instead of discussing industrialization, infrastructure or criminalization of politics issues like “pink revolution” and Bangladeshi refugees (read Muslims) became the focus of attention. Even the chicken-biryani served to a visiting Prime Minister became a vote catching device.

The second thing to remember will be the role of money power and how to regulate the election expense. The amount of money “officially” spent on this election will surpass all previous records, not to speak of the unaccounted expenses. Add to this the public money spent before the enforcement of the election code by way of expensive government advertisements. Even a fool knows that these ads at public expense are intended for electoral gains by projecting the ruling party and its leaders. The Supreme Court is already examining this issue. The almost total silence of the media on this issue proves that greed takes precedence over principles. Who would like to lose the revenue such ads generate for the media?

Apart from state funding of elections, the addition of party expense to the candidates’ expense needs to be discussed. The parties must be made to disclose the source of these funds and the limit for disclosing only the amounts more than Rs 2000/-should be abolished. Such huge spending can seriously undermine the very foundations of our democracy. No real “chaiwala” will be able to contest even for the seat of a Municipal Councilor! If the intelligent, educated people are rendered unable to fight elections we will be excluding a very important section of society from participating in the “dance of democracy”. The democracy will be reduced to a farce with corporate moneybags and mafia calling the shots. No wonder the list of “crorepati” MPs is growing and criminals are being elected in larger numbers.

The role of media is another issue that needs discussion not only because of their partisanship but also because they are considered a holy cow. Whenever someone talks against media malpractices a bogey of press freedom is raised. Individuals and parties seeking to curb unethical media practices are blacklisted and hounded. The phenomenon of paid news is well known but the “surrogate” paid news has not received enough attention. Any party or individuals that give more ads to the media receive better coverage even in the regular time. It is a courtesy all businessmen extend to their regular customers! Those candidates who are unable to pay for expensive election ads are thus doubly disadvantaged.

A system needs to be evolved by which all candidates get enough media time and space for projection of their agenda and electioneering. In fact such proposals should have come from the media. This will go a long way in reducing the power of money and offering a level playing field. It will also help to bring back into the system a large section of public that is being systematically excluded from participating in our democracy.

Another thing for which this election will be the huge mismatch between the percentage vote share and the number of seats won. Never before have so many seats been won with such small percentage vote share. This brings us to the question of proportionate representation. It is expected that those who have benefitted from this flawed system will be loath to change it, but it should be remembered that anyone can be at the receiving end the next time. The system of electing the first across the winning post is simple and the proportionate representation may generate many fresh problems but it merits serious discussion. Complexity of process should not be an excuse to persist with a flawed set up.

Another serious flaw in our electoral process is the total absence of accountability. The public participation in the democracy is just a “one point participation”. You elect someone, give him the reins of power and forget it for 5 years. If you agitate for change in laws it is called the “tyranny of the unelected”, if you sit on dharnas your are disrupting the system; if you confront the security forces you may even be labeled a Maoist! The master (public) has no control over the servant (MLA, MP) for the next five years. It is time we started discussing about the right to recall and referendum on important issues. The expense involved in such practices will actually reduce the total electoral expense. Such a system in place will discourage from using money and muscle power to win elections through dubious means.

Lastly, the role of the election commission (EC) has to be reviewed. Over the years the EC has proved to be an effective institution. On the law and order front the EC has done very well to maintain order but one can not say the same about law. The violations have been quite selectively dealt with. People have been booked offences as small as carrying two loud speakers instead of one, while serious offences have been overlooked. And once the election is over there is a strange tendency apply the forget and forgive policy. Of late the EC has not come up with any firm ideas on curbing misuse of money and media. The voter expects the EC to provide a level playing field to one and all. Let us hope that the new government and the EC work in tandem to reform the election process in the right direction.

Mr. Modi has assiduously projected himself as a symbol of hope and raised huge expectations. He has promised to send criminal candidates to jail within one year. One hopes that he understands that criminalization of politics is not the only flaw in our democracy. Money, mafia and muscle power go hand in hand. One also hopes that he sticks to this promise. A level playing field in all spheres of electioneering like expense, propaganda, media coverage and ethical campaigning has to be ensured if we want to call ourselves the largest democracy in the real sense.