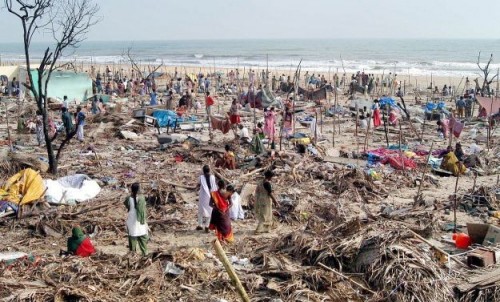 A decade after the Indian Ocean tsunami hit several countries in the Asia-Pacific region killing over 200,000 people, India has not only developed an effective early warning system but is also capable of providing advisories to 25 countries on the Indian Ocean rim.

Learning its lesson from the disaster, India has set up a centre capable of detecting the tsunamigeneic earthquakes and issuing tsunami warnings based on the seismic information in less than 10 minutes after the occurrence of earthquake in the Indian Ocean.

Established in 2007 at the Indian National Centre for Ocean Information Services (INCOIS), the Indian Tsunami Early Warning Centre (ITEWC) monitors tsunamis and provides timely advisories leaving a response time of about 10-20 minutes even for a near source region in the Andaman and Nicobar Islands and a few hours for the mainland.

The centre receives data via satellite from tsunami buoys in the Bay of Bengal and the Arabian Sea. These buoys are equipped with water pressure sensors to detect any rise in water levels.

When tsunami waves swept many countries Dec 26, 2004, killing 238,000 people including over 10,000 in India, there was no system of real-time monitoring of earthquake or the sea level in the Indian Ocean.

Scientists say the centre is equipped to warn in real time if sub-duction zone related earthquakes in Andaman-Nicobar-Sumatra island arc and the Makran sub-duction zone north of the Arabian Sea can trigger tsunamis.

Built indigenously in two years at a cost of Rs.125 crore, the centre involves 14 different organisations and 150 scientists.

During last seven years, it recorded 37 undersea earthquakes and issued a warning only once (in 2012) for three islands in Andaman and Nicobar when an undersea temblor of 8.7 occurred.

Tsunami buoys installed by the National Institute of Ocean Technology (NIOT) are the key sensors to confirm the triggering of a tsunami while tide gauges monitor the progress of tsunami waves.

According to officials, an early tsunami warning can help the 400 million people living in India’s coastal areas to save themselves.

ITEWC has developed one of its kind Standard Operating Procedure (SOP) to disseminate timely tsunami warnings to disaster management officials and vulnerable communities along with the time that will be taken by the tsunami wave to reach the coast and estimated height of tidal waves.

According to INCOIS director S.S.C. Shenoi, with advanced concept of quantitative forecasts, India’s tsunami bulletins are timely and accurate compared to many contemporary systems.

Thus it was no wonder that India played a key role in Indian Ocean Tsunami Warning and Mitigation System (IOTWS), which the Intergovernmental Oceanographic Commission of UNESCO has developed.

In 2011, ITEWS was designated as Regional Tsunami Service Provider (RTSP) with the responsibility for providing tsunami advisories to Indian Ocean rim countries.

As part of RTSP service, India regularly takes part in the communication tests and tsunami wave exercises. India and 23 countries participated in a two-day mock tsunami drill in September.

The drill was aimed at evaluating the system’s operational capacity, the efficiency of communications among the different concerned actors, and the state of preparation of national emergency services.

The Indian facility is constantly evolving new strategies by focusing its efforts towards development of new methodologies and warning procedures. It is making efforts to reduce the warning time and thus extend the time-line for alert and evacuation in the areas likely to be hit by tsunami.

Tsunami is a series of ocean waves of extremely long wavelength around 100-250 km in the deep ocean, generated primarily by earthquake occurring below the ocean floor, and break ashore more like a long lasting flood waves. Underwater volcanic eruptions and landslides can also generate tsunami.