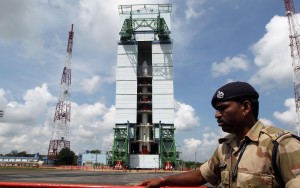 The 67-hour countdown for the Thursday launch of India’s third navigation satellite is progressing smoothly though a thunder storm Wednesday delayed some operations, a senior space agency official said.

“Today (Wednesday) morning we moved the mobile service tower (MST) backwards. The operation was delayed by around two hours owing to thunderstorm in the morning. There is sufficient time cushion built in for such unforeseen delays in the countdown period,” M.Y.S. Prasad, director, Satish Dhawan Space Centre at Sriharikota, said.

“At 10 p.m., based on the climatic conditions like thunderstorm, we will decide on the launch. Currently everything is normal,” he added.

Prasad said the filling of propellants in the second stage/engine would be completed by 2 p.m.

Following that the gases in the various stages would be pressurised.

The 44.4 metres tall rocket, weighing around 320 tonnes is expected to spit out the satellite into the space around 20 minutes after the blast-off.

Once the satellite is successfully placed in its orbit, India will be just one more satellite away from having its own satellite based navigation system.

Indian Space Research Organisation (ISRO) chairman K. Radhakrishnan had earlier said, though IRNSS is a seven-satellite system, it could be made operational with four satellites.

On Oct 12, ISRO’s Launch Authorisation Board (LAB) gave its nod for the launch. The countdown began Monday morning.

Originally the satellite was scheduled for launch Oct 10, but was put off by a week due to a glitch in the telemetry system.

During the countdown, propellant filling activities would be carried out along with checking of the various systems.

The satellite is part of the Indian Regional Navigation Satellite System (IRNSS) that will have a constellation of seven satellites to provide accurate positioning service for terrestrial, aerial and maritime navigation in 1,500-km area in the Indian peninsula.

The second navigation satellite (IRNSS-1B) was launched April 4 this year from the spaceport. The first one – IRNSS-1A – was launched July 2013.

The Indian system will be similar to the US Global Positioning System (GPS), Russia’s Glonass and Europe’s Galileo constellation of navigation satellites.

India began its space journey in 1975 with the launch of “Aryabhatta” using a Russian rocket and till date, it has completed over 100 space missions including missions to the Moon and Mars.