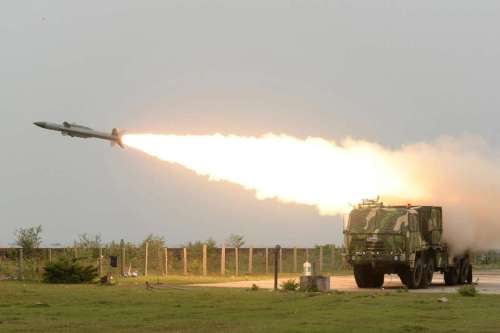 India is readying for the full-fledged test-firing from a canister of an indigenous long-range missile that carries a one-tonne nuclear warhead and can target cities as far as Beijing.

The previous two launches of the 5,000 km Agni-5 intercontinental ballistic missile (ICBM) with dummy warheads have been from open mobile launchers. The canisterised version has a much longer shelf-life, with the container being made of special steel that absorbs the blast of the takeoff.

“The test will happen by the end of November or early December. It will be another feather in the cap of Indian missile scientists,” an official of the Defence Research and Development Organisation (DRDO) that developed the 50-tonne missile said on condition of anonymity.

“We have already successfully fired two dummy missiles, and we are confident that the canister launch will be successful,” the official added. The dummy missiles tested were of exact mass and height as the Agni-5, but without the warhead.

According to the official, in the launch, a gas generator inside the canister ejects the missile up to a height of about 30 metres. A motor is then ignited to fire the missile.

As the launch process happens inside a canister, it takes away the need of a jet deflector on the launcher that is otherwise needed for redirecting the high energy exhaust.

The strength of the surface of the launch pad is not a critical factor either, making it possible to launch the missile from anywhere.

In addition to giving the user more flexibility, a canister-based missile offers the option to launch at a very short notice and with less manpower.

“As the missile is sealed in a canister, there is no impact on the outside environment. This protects the missile, and many pre-checks are not needed, making the launch process shorter,” the official added.

The Agni-5 is the most advanced version of the Agni, or Fire, series, part of the Integrated Guided Missile Development Programme that started in the 1960s.

Before this, DRDO scientists successfully conducted from an underwater pontoon the K-15 ballistic missile that will be used to arm the Indian Navy’s submarines.