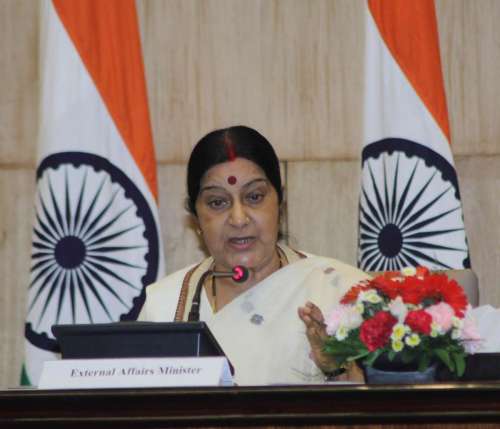 The government  said it has not given up hope on the Indians missing in Iraq, and added that the reports of them having been killed are not confirmed.

External Affairs Minister Sushma Swaraj said one of the captives, Harjeet Bassi who managed to escape, had claimed that all others were taken to a forest and shot.

“Bassi said he and others were taken to a forest and shot. ‘I was the only one left’,” Sushma Swaraj told the Rajya Sabha.

“There are contradictions in the story Bassi told… It is logical not to accept the statement. We have got six sources which said they have not been killed,” she said.

Around 40 Indian men continue to be missing in Iraq after they were abducted by the IS. They were employed with a Turkish construction company in Mosul.

Bassi, who hails from Gurdaspur in Punjab, said he and other captive Indians were fired upon. He somehow managed to escape. Officials, however, said there are contradictions in his account.

Bassi, Swaraj said, is in “protective care” of the Indian government.

“We have got not just oral but written messages that say they are alive,” she said, adding that the content of the letter cannot be disclosed.

The minister, however, said she has shown the messages to her colleagues Finance Minister Arun Jaitley and Food Processing Industries Minister Harsimrat Kaur Badal.

Swaraj also said that two officers well-versed in Arabic have been appointed for this in Iraq.

“For the sake of hope, we have to keep the search on,” said the minister.

“We have contacted every nation, every person, and every organisation we can get in touch with.”

While she named Red Crescent as one of the organisations helping the government, the minister added that the names of the individuals cannot be disclosed for their safety.