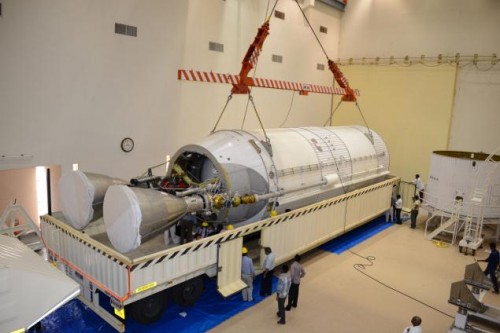 India  moved forward in rocket technology with the successful flight testing of its heaviest next generation rocket and the crew module.
Precisely at 9.30 a.m., the 630 tonne Geosynchronous Satellite Launch Vehicle-Mark III (GSLV-Mark III) standing 43.43 metre tall freed itself from the second launch pad and with a reverberating deep throated roar, rose into the sky.

With a thick orange flame at its tail, the expendable rocket ascended towards the heavens with one way ticket as its design life span is just around five minutes.

The Rs.155 crore mission has twin purposes. The main purpose is to test the rocket’s atmospheric flight stability with around four tonne luggage.

The second and incidental objective is to study the re-entry characteristics of the crew module-called Crew Module Atmospheric Re-entry Experiment – its aero braking and validation of its end-to-end parachute system.

According to an Indian Space Research Organisation (ISRO) official, it will be of the size of a small bedroom and can accommodate two to three people.

Just over five minutes into the flight, the rocket spat out the giant cup cake shaped 3.7-tonne crew module at an altitude of 126 km.

The crew module then descended towards Earth at a high speed. The speed was moderated remotely manipulating its on-board motors till 80 km above the earth.

From here the ballistic re-entry into the atmosphere began while the on-board thrusters were shut down.

The crew module’s heat shield was expected to experience a heat of around 1,600 degrees centigrade.

At an altitude of around 15 km, the module’s apex cover separated and the parachutes were deployed.

The module soft crashed in Bay of Bengal near Andaman and Nicobar Islands.

From here, the crew modules multi-modal and multi-state transport journey would begin.

A naval ship tracking the signals from the module will pick up the module and deliver it at the Ennore Port near Chennai in Tamil Nadu. From there it will be brought to Sriharikota in Andhra Pradesh and then it will be taken to the Vikram Sarabhai Space Centre, Thiruvanthapuram in Kerala.

At the mission control centre there was no control on ISRO’s scientists happiness at the success.

Speaking about the mission, ISRO’s Chairman K. Radhakrishan said: “India started development of the rocket a decade ago and today completed the first experimental flight.

“The performance of the solid and the liquid engines were as expected,” he said.

“The unmanned crew module splashed in Bay of Bengal as expected,” he added.

The Thursday mission success is sweet for the Indian space fraternity as it comes after successful launch of Mars Orbiter last year and older version of GSLV rocket powered by its own cryogenic engine early this year.

A cryogenic engine is more efficient as it provides more thrust for every kilogram of propellant burnt.

This was the second mission of GSLV rocket during the last four years after two such rockets failed in 2010.

The GSLV-Mark III is designed to be a three stage/engine rocket with a lift off weight of 630 tonnes.

The third stage/engine is the cryogenic.

For the country ISRO perfecting the cryogenic engine technology is crucial as precious foreign exchange can be saved by launching communication satellites by itself.