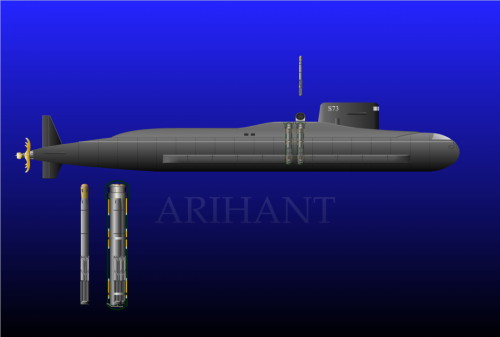 In a major boost to indigenisation of defence manufacturing, India’s first nuclear-powered and nuclear-armed submarine INS Arihant will head out for sea trials by the year-end.

“INS Arihant will be ready for sea trials by the end of this year,” an official aware of the developments relating to the 6,000-tonne submarine said, speaking on condition of anonymity.

Once the trials are through and the submarine enters service, India will not only complete its nuclear triad of delivering nuclear weapons from land, sea and air, but also join an elite club of six nations that operate nuclear submarines carrying ballistic missiles. The US, Russia, France, Britain and China are the other nations with this capability.

The INS Arihant’s miniaturised nuclear reactor, built with Russian help, had gone critical last year and the vessel has been going through a series of harbour trials since then at Visakhapatnam, where it is being built.

The submarine has also been going through the power-up cycle of its nuclear reactor and has now achieved a nearly 100 percent power level, the official said.

“Its reactor had gone critical last year. We are now close to attaining 100 percent its power,” the official said, adding: “The nuclear reaction is highly controlled. It is something similar to nuclear power plants, but extra caution is needed. The reactor is now functioning perfectly well,” the official said.

Once the submarine attains 100 percent power, it will head out to sea for its final trials, which will include the firing of the indigenous Bo5 missile that has a 700-km range and can carry a one tonne nuclear warhead. INS Arihant can carry 12 such missiles.

The vessel, the lead ship of the Arihant-class submarines, was launched in 2009. Its design is based on the Russian Akula-1 class submarines and its 83MW pressurised heavy water reactor has been built with significant Russian assistance.

While its 100-member crew has been trained by Russian specialists, Indian scientists at Mumbai’s Bhabha Atomic Research Centre have received significant expertise in reducing the size of the reactor to help it fit into the 10 metre diameter hull of the submarine.

The Indian Navy currently operates the INS Chakra nuclear-powered submarine leased for 10 years from Russia in 2012.

Nuclear submarines stay out at sea for longer periods than diesel-electric powered boats and can also remain under water for longer durations. Conventional submarines have to surface at regular intervals for re-charging their batteries, making them vulnerable to detection.

Two other vessels of the Arihant class are also believed to be under construction at Visakhapatnam’s state-owned Hindustan Shipyard Limited.