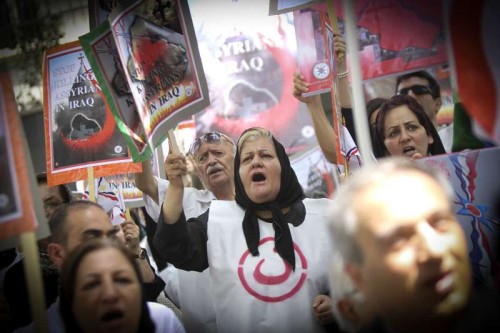 There are serious ambiguities in the real intention of an emerging so-called international coalition against the Islamic State (IS) terrorist group, Iran’s foreign ministry said Thursday.

The formation of an international coalition against IS militants was raised by the US at the end of the NATO summit in Wales, Britain.

“There are doubts about seriousness of the coalition which has come to existence after the NATO summit, in its fight against terrorists,” IRNA news agency quoted foreign ministry spokeswoman Maziyeh Afkham as saying.

One month after launching airstrikes against the extremist militant group in Iraq, US President Barack Obama Wednesday vowed that he “will not hesitate to take action” against the IS in Syria and Iraq.

Obama said Washington would work with its friends and allies to “degrade and ultimately destroy” IS forces, which posed a threat to the people of Iraq and Syria, and the broader Middle East, including American citizens, personnel and facilities.

Afkham argued that certain member states of the so-called coalition were among financial and security supporters of terrorists in Iraq and Syria.

In Wednesday’s speech, Obama authorised US airstrikes inside Syria for the first time and send 475 more US troops into Iraq, on top of the 1,125 already there.

The US military has so far conducted about 150 airstrikes on IS targets inside Iraq.