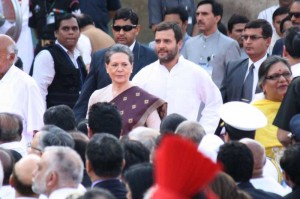 Amulya Ganguli writes on the future of Congress

The Congress high command, which means the mother-and-son duo of Sonia and Rahul Gandhi, is mistaken if it believes that the deep nervousness among Congressmen about the party’s bleak future can be dispelled by a token offer of resignation by the two and a clean chit for themselves which they secured from a servile acolyte, A.K. Antony, in a report about the election debacle.

The simmering of anxiety and discontent has continued with the split in the party’s Tamil Nadu unit providing the latest evidence of the disquiet. The rupture recalled an earlier break-up when a new party, the Tamil Maanila Congress (TMC), was formed under a veteran Congress leader of the time, G.K. Moopanar. Now, his son, G.K. Vasan, is the rebel.

Among the important members who were a part of the TMC was P. Chidambaram, whose son Karti has recently said the high command “culture” must go at a time when the party has reached a “historic low”.

There is little doubt outside the party – and probably among large sections within it as well – that the main reason for reaching this lowly stage is the lack of a credible leadership. Neither Sonia nor Rahul has measured up to the standards required to face the challenge posed by a resurgent Bharatiya Janata Party (BJP) under Narendra Modi. Nor has the Congress formulated an ideology which has wide acceptance.

The party’s lack of vision is evident from the fact that even the cornerstone of its philosophy – secularism – has come under attack from within the Congress. For instance, the loyal Antony has noted in his report that the party’s practice of secularism has come to be associated with Muslim appeasement, a charge which has been made by the BJP from the 1990s with L.K. Advani coining the phrase, pseudo-secularism, to describe the Congress’s muddled version.

Not surprisingly, Digvijay Singh, the senior general secretary of the Congress, acknowledged that the party made the mistake of not being equally vocal about both Hindu and Muslim fundamentalism.

The Congress’ other deficiency is in the field of economic policy. The root of this failure lies in its inability to break free from the Nehruvian concept of socialism, manifested in a 1955 resolution calling for the establishment of a “socialistic pattern” of society. As a result, the Congress never wholeheartedly accepted the economic reforms of its own government in 1991.

To a large section of Congressmen as well as the Left-leaning intelligentsia, not to mention the Communist parties, the reforms are a panacea for the country’s ills prescribed by what the Left calls the international finance capital represented by the World Bank and the International Monetary Fund. Moreover, to the Left, these institutions are the spearheads of American neo-imperialism.

Given this outlook, it is not surprising that the mother and son are again considering rolling back the Manmohan Singh-Chidambaram-Montek Singh Ahluwalia brand of economics and returning to the pre-’91 days. Some of this regression was evident in the twilight years of the Manmohan Singh government when the reforms were virtually stalled with Chidambaram subsequently regretting the “mistake of taking the foot off the accelerator of reforms”.

It goes without saying that the deceleration would not have taken place without the approval of the Congress president and her “kitchen cabinet”, the National Advisory Council (NAC) comprising crypto-Communists.

What is strange, however, is that despite the Congress’ resounding defeat in the general election, primarily as a result of the stalled reforms and the plummeting growth rate, the high command hasn’t seen the writing on the wall that the era of liberalization has changed the mindset of Indians.

The new generation is no longer enamoured of a family-dominated socialistic pattern of society which distributes doles and subsidies to targeted groups in the hope that such largesse with benefit the feudal dispensation. Instead, the younger people want to avail of the opportunities provided by a buoyant economy where the private sector plays a leading role.

Even the true-blue – or, rather, the true-red – Communists understood this new reality. Jyoti Basu, for instance, said that “socialism is a far cry” and that “private capital has to be used for industrialization”. This was an endorsement of the line of his successor as West Bengal chief minister Buddhadev Bhattacharya, who ardently wooed the private sector.

It is possible that since Modi has stolen the reforms plank, the Congress believes that it has no option but to turn left. But any such move will further widen the gulf between the party and the aspirational generation, plunging the Congress into deeper gloom, especially if it continues to fare badly in the assembly elections.

One way out is for the dynasty to take a sabbatical, as former Congress MP Jagmit Singh Brar suggested, so that the party can start cutting loose from the apron strings of a family whose deficiencies in the matter of inspirational leadership or intellectual acumen are becoming increasingly apparent. The argument that the Congress will fall apart in the dynasty’s absence begs the question since it is disintegrating even now.