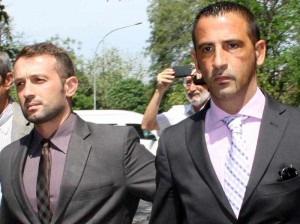 Massimiliano Latorre and Salvatore Girone were arrested for killing the fishermen off the coast of Kerala in February 2012, mistaking their fishing boat for a pirate vessel. The two are currently on bail.

The marines have been living and working at the Italian embassy in India pending charges in the case, that has stressed relations between India and Italy.

“They were on an anti-piracy mission and therefore covered by the immunity of being state officials and this certifies the international ambit of the case,” Pinotti said.

The Italian government stressed that it will take the case to international arbitration if the pair are not allowed to come home soon.

Italy also expressed hope that the new Indian government led by Narendra Modi would be open to negotiations.

“It is still possible to seek an agreement with the new Indian government, but if an agreement is not possible and we find ourselves faced with attempts at deferment or rejection, we will go ahead with the arbitration procedure and we hope to have them here as soon as possible,” the defence minister said.

Last month, the Italian government announced it was opening a “new phase” in the saga, replacing its special envoy in the case and sending its ambassador back to New Delhi to help steer the case towards arbitration.

Italy has long attempted to win international support in the case.

The Indian Supreme Court had March 27 sought a response from the government on the petition filed by the two marines challenging the jurisdiction of NIA to probe and prosecute the case.

This came after the marines told the court that the Indian government had decided to withdraw their prosecution under the stringent anti-piracy law that attracts the death penalty as maximum punishment.