A group of residents gathered at Jumeirah’s Kite beach early on Friday to take the ALS ice bucket challenge with one difference — they doused themselves with sea water instead of clean water, according to a Gulf News report. 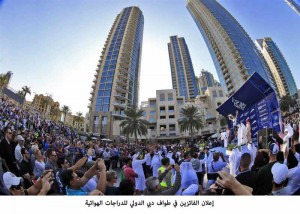 ALS (Amyotrophic Lateral Sclerosis) is a progressive neurodegenerative disease that affects nerve cells in the brain and the spinal cord. The Dubai ALS ice bucket challenge was organised by Ravshan Abitov, who planned the event on Facebook.

“I am very happy that people joined us today in our initiative. The main idea of today, besides spreading the awareness about ALS and encouraging people to donate, is to send a message worldwide that whatever the cause, whether it’s a disease or other problems, people should stand united no matter what religion, country or ethnicity they represent.” Abitov told the Gulf News.

He added that groups have stronger effects and he hopes other communities would come together for good causes. As clean water is a scarce resource, he tolf Gulf News, and there were any complains about the challenge because people were wasting water, that is why they decided to use sea water.

Abitov urged everyone who particpated to share the video that will be posted on the group’s page, in order to raise more awareness about ALS. According to the ALS Association website, as of Wednesday, August 27, The ALS Association has received $94.3 million in donations compared to $2.7 million during the same time period last year – July 29 to August 27. They added that these donations have come from existing donors and 2.1 million new donors.

Toby Masson,38, British Dubai resident, who took part in the challenge told Gulf News that “it’s really heart-warming to see what’s happening here.” In February last year, Masson lost his father to ALS. He said “the average life expectancy of an ALS patient is between 2-3 years, but more than 50 per cent of patients die within 14 months – my dad died in 11 months.

He said that as his father’s illness progressed he became fully dependent on Masson’s mother and sisters for his everyday needs. “But within six months he was confined to a wheelchair and it became too hard for my mum to handle, and that is when Motor neuron diseases association, which is the main ALS charity in the UK stepped in.”

He said they took care of his dad in every way, provided medical care and installed railings and hoists to help move his father around the house. He said that this would not have been possible without donations.

Eleven-year-old Mohammad Fawaz, Indian UAE resident, said that he had already taken the challenge but he was there was to show his public support. “The main reason I came here is to support ALS [patients] and show that it’s a disease that can be solved if there is enough research. I thank the organisers for providing this chance”

Elena Abitov, the organiser’s wife and her 11-month-old daughter Edonna, who were part of the challenge said “I am really proud to see how the community came together and united for this cause and you saw the diversity. I am happy my daughter, who I think was the youngest participant, would be here because I hope she grows in a community were people come together over good causes.”