Prime Minister Narendra Modi in his maiden speech in the Lok Sabha said Wednesday that his government would “leave no stone unturned to fulfil” the promises outlined by President Pranab Mukherjee in his address. 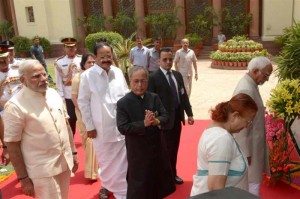 Giving the example of his time as Gujarat chief minister when he lived up to the promise of providing 24-hour electricity across the state, Modi said: “It is understood that people will have doubts… But I assure this house that the path mentioned by the president, we will leave no stone unturned to fulfil them.”

“For us, the president’s address is part of tradition… The words are like a divine address and to fulfill them it will be our endeavour, and it will also inspire us to work.”

While beginning his speech, Modi said it was the first time he has come to the Lok Sabha and it was his maiden address. He asked the members to excuse him for any lapses he might make due to inexperience.