Indian Prime Minister Narendra Modi arrived in the Bhutanese capital on a two-day official visit Sunday, his first foreign tour since taking over the reins of the government in New Delhi May 26. 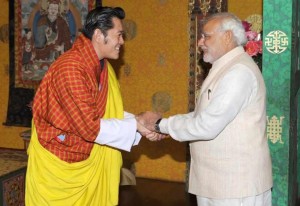 Modi arrived to a red carpet welcome at the picturesque Paro International Airport, which is ringed by mountain ranges, where he was greeted by his Bhutanese counterpart Tshering Tobgay, cabinet ministers and senior government officials.

He will call on Bhutan King Jigme Khesar Namgyel Wangchuck and also hold talks with Tobgay. In the evening, Modi will inaugurate the new Supreme Court building in Hejo, which was constructed with funding from the Indian government.

Prime Minister Tobgay will host a banquet for Modi at the Royal Banquet Hall in the evening after their talks.

On Monday, Modi will call on former king Jigme Singye Wangchuck, a close friend of India.

Modi will address a joint sitting of the third session of the second parliament of Bhutan. 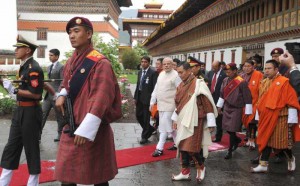 On Monday, he will also lay the foundation stone of the 600 MW Kholongchu hydropower project, a joint venture model between Satluj Jal Vidyut Nigam and Druk Green Power Corporation. Construction on the project is expected to start later this year.

The Bhutan king will host a lunch in honour of Prime Minister Modi and his delegation, before they depart for home June 16.