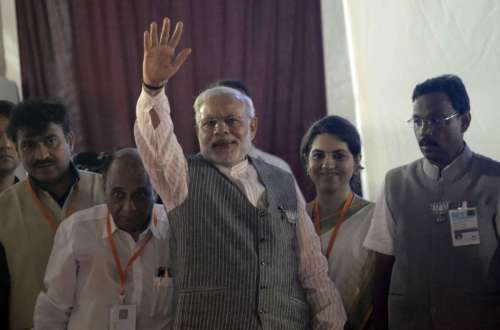 Prime Minister Narendra Modi arrived here  on a day-long visit to campaign for the BJP in the Jammu and Kashmir assembly elections.

A special plane carrying the prime minister landed at the technical area of Jammu airport at 11.45 a.m.

From the airport, Modi took an Mi-17 helicopter to reach the venue of the Bharatiya Janata Party rally in Samba district.

Modi is scheduled to address a BJP election rally on the Jammu-Pathankote national highway at Raya Morh, about 25 km from Jammu city in the Vijaypur assembly constituency of Samba district.

A heavy security blanket has been thrown around the Raya Marh rally of the prime minister.

“We are taking no chances with security on the prime minister’s visit to Srinagar today especially in the wake of last Friday’s terror attacks in the Valley,” a top official of the state’s security grid said here.

The officer also confirmed that more than 4,000 security personnel drawn from central and state security forces have been deployed on the security in and around the Sher-e-Kashmir Cricket Stadium, where Modi will address a BJP election rally today afternoon.

“This is in addition to security force deployment at other places in Srinagar city”, the officer said.

Restrictions have also been imposed in five police station areas of Srinagar. The areas placed under restrictions fall under the jurisdiction of Rainawari, Nowhatta, M.R. Gunj, Khanyar and Safakadal police stations.

Modi will visit the Badami Bagh cantonment headquarters of the army’s 15 corps in Srinagar before arriving at the public rally venue in the afternoon, BJP sources said here.

“The Prime Minister will begin his Srinagar visit by paying homage to the martyrs of the army who laid down their lives fighting the terror attack at Mahura camp in Uri last Friday”, a local BJP leader said.