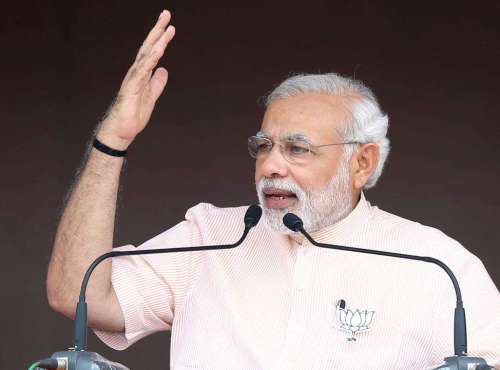 Prime Minister Narendra Modi Saturday exhorted people in this Jammu and Kashmir town to unshackle themselves from the yoke of dynastic rule and promised to make the state the “ultimate tourist destination in the world”.

Modi said that Jammu and Kashmir had been held hostage by two families for over 50 years — without naming either the Congress or the National Conference.

“One family rules and robs the sate for five years and then after it becomes unpopular, it gives the power to rob the state to the other family. They have done a political match fixing between themselves.

“I appeal to you to unshackle yourselves from the yoke of this dynastic rule,” said Modi while addressing a well-attended Bharatiya Janata Party (BJP) poll rally here.

He asked people to vote for the BJP in large numbers so that the next government in the state is formed by the BJP on its own strength.

The state will see a staggered five-phase elections that begins Nov 25 and ends Dec 20.The votes will be counted Dec 23.

Modi spoke of former prime minister Atal Bihari Vajpayee’s vision for the state, asserting he would use all his power to realize that dream.

“I have a vision for Jammu and Kashmir and that vision is based on Atal Bihari Vajpayee’s vision of Insaniyat, Jumhooriyat and Kashmiriyat.

“There were times when Kutch district in Gujarat was the most backward area of the country…I learnt a great thing by visiting Kutch. I had then recently taken over as the chief minister of Gujarat. I met people there who told me they were fed up of repeated speeches by politicians about the looming threat from across the border.”

He added that “people there wanted me to speak to them about development and progress in their lives. I learnt there that power of this vision in Kutch. Today Kutch is the fastest developing district of the country”.

“It produces more electric power than the entire state of J&K. If Kutch can prosper, so can Kashmir. I have come to seek your cooperation to realize that dream for Kashmir.”

The prime minister said that development is his mantra for the entire country.

He spoke of the rehabilitation of refugees who came here from Pakistan after 1947 and are living in Jammu.