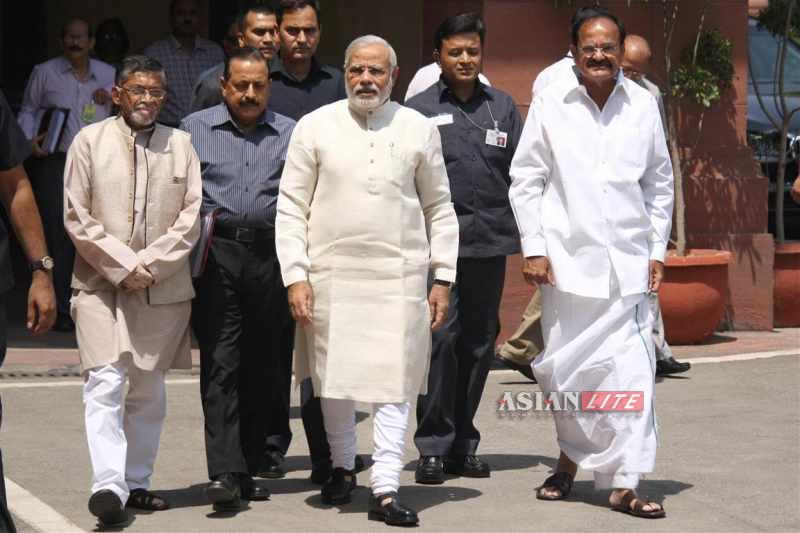 Prime Minister Narendra Modi and his cabinet colleagues on Thursday took oath as members of the newly-elected 16th Lok Sabha.

Senior Congress leader Kamal Nath, who Wednesday was sworn-in by President Pranab Mukherjee as the pro tem speaker, administered the oath to Prime Minister Modi, who was attired in spotless white churidar-kurta and matching jacket.

They were followed by Arjun Charan Sethi of the Biju Janata Dal, P.A. Sangma of the National People’s Party and Biren Singh Engti of the Congress.

After them, most of the members of the council of ministers of the National Democratic Alliance government took their oath as MPs of the new Lok Sabha.

External Affairs Minister Sushma Swaraj took her oath in impeccable Sanskrit. The senior Bharatiya Janata Party leader was followed by her party colleague and Mminister for Water Resources and Ganga Rejuvenation Uma Bharti, who too took her oath in Sanskrit as did union Health Minister Harsh Vardhan.

Union ministers from Karnataka, including Railway Minister Sadananda Gowda, Minister of Chemicals and Fertilisers Ananth Kumar, and Minister of State for Civil Aviation G.M. Siddeshwara, took their oath in Kannada.

Harsimrat Kaur Badal of the Shiromani Akali Dal, who is minister for food processing industries, took oath in Punjabi.

The 16th Lok Sabha has 315 first-time lawmakers, the highest in 30 years for any house that has 543 elected and two nominated members, according to data compiled by PRS Legislative, a research group that tracks the working of parliament.