Prime Minister Narendra Modi will fly to Kyoto Saturday at the start of his Aug 30-Sep 3 Japan visit, it was announced Thursday. This will be Modi’s first visit outside South Asia since he took office in May. 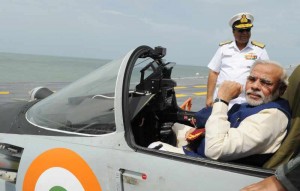 Modi will be received in Kyoto by his Japanese counterpart Shinzo Abe, who will host a dinner Aug 30, external affairs ministry spokesperson Syed Akbaruddin told the media.

The Japan visit would be “extremely substantial”, he said.

“Wide range of discussions that will take place is expected to lead to an outcome that will elevate our strategic and global partnership to a new level,” Akbaruddin said.

He said India will explore new areas of cooperation with Japan. “We are looking at new vistas for Indian goods and services to Japan.”

In the area of defence, Akbaruddin said the two countries already enjoy cooperation of navies that deal with common perception in terms of maritime security and anti-pirate operations.

Asked if there will be a civil nuclear agreement between India and Japan during the visit, Akbaruddin said talks in that direction have been going on since 2010.

“There have been several useful cooperation between Indian and Japanese interlocutors. These have yielded substantial results,” he said, adding that an immediate agreement was unlikely.

“Civil nuclear issues are of immense technical complexity. We are working towards a satisfactory outcome for India and our friends in Japan,” he said.

On the question whether there will be any agreement with Japan on bullet trains, he said the chances of the agreement were speculative.

Akbaruddin said Kyoto was added to the schedule as it “represents confluence of the civilisational heritage of India and Japan through Buddhism”.

“Kyoto is a magnificent example of how a city can maintain its cultural heritage and modernise itself at the same time.

“It also dovetails how smart cities can be environment-friendly, modernise itself with cutting-edge technology and retain its cultural significance. All these three elements are part of Modi’s vision,” he added.

Modi will have meetings with the governor and mayor of Kyoto the same day.

“The mayor of Kyoto will showcase the city’s effort of preserving cultural heritage while witnessing modernisation. He will highlight that in a presentation to Modi,” Akbaruddin said.

He said there were plans to replicate the same model while modernising the Hindu holy city of Varanasi, also the Lok Sabha constituency of Modi.

Modi will fly to Tokyo Sunday evening, and be given an official welcome at a ceremony in Akasaka Palace Sep 1.

“There will be a detailed delegation-level talk. There may be signing of an agreement. It will be followed by a joint press remark by Modi and Abe, after which the latter will host a banquet for Modi,” Akbaruddin added.

He said a series of Japanese ministers will call on Modi including the deputy finance minister, foreign minister, defence minister, and transport and tourism minister.

“Modi will also address the business community hosted by the Japanese chamber of commerce and its Indian counterpart. He will also visit an elementary school in accordance with his focus on education having a very vital role in India’s development story,” he said.

He said the meeting will be followed by Modi’s visit to a college where he would address the students.

“He (Modi) will inaugurate the Vivekananda Cultural Centre and meet political leaders across the political spectrum in the day,” he added.

Modi will be accompanied by Foreign Secretary Sujatha Singh and Expenditure Secretary Ratan Watal among others.

“Modi has focused on taking a lean team. This focus will continue in this trip also,” he said.