India needs to focus on skill, scale and speed to compete with China, Prime Minister Narendra Modi said on Sunday, drawing a link between the colours in the national flag to the revolutions the country needed for its future growth.

Releasing a book, “Getting India Back on track – an action agenda for reform”, at a function at his 7 Race Course Road residence here, the prime minister said “input of intellectual think tanks” should be substantially enhanced for better policy framework. 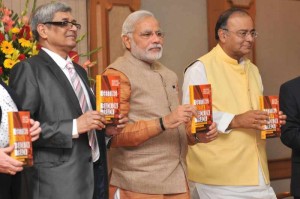 Modi said India needs to exploit the demographic dividend as 65 percent of its population was below 35 years of age.

He said if India has to compete with China, the focus should be on skill, scale and speed.

He said universities should be actively involved in research and analysis of the development process to contribute in the best possible way for policy-related decisions.

Referring to infrastructure, he said the focus needs to shift from highways to “i-ways”, and optical fibre networks.

Modi said cities in the past were built along river banks and were now built along highways, but in the future, they will be built on availability of optical fibre networks and next-generation infrastructure.

The prime minister said urbanisation should not be treated as a problem, but as an opportunity.

“If we have to generate employment and change for the better, we plan to build 100 smart cities,” he said.

Modi referred to the colours of the national flag to suggest revolutions needed for the country’s growth in the future.

Referring to the green colour in the flag, he said: “We need to bring about a second green revolution focusing on increased agro productivity, value addition, agro technology, and decentralisation of warehousing.”

Referring to the white colour, he said a white revolution must focus on increasing milk productivity and developing a support system for ensuring cattle health.

Modi said the saffron colour in the flag represents energy. “We need a saffron revolution that focuses on renewable energy sources such as solar energy, to meet India’s growing energy demand.”

Referring to the blue colour of the Ashok Chakra (wheel) in the national flag, Modi said the blue revolution should focus on the fisheries sector, including ornamental fish.