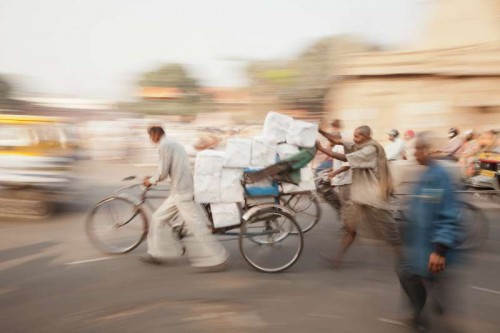 India’s gross domestic product (GDP) is estimated to grow next year in the range of 5-6 percent on the back of stronger domestic demand, ratings agency Moody’s said Wednesday.

“India will have stronger GDP growth in 2015, which we forecast at 5-6 percent, up from around 5 percent in 2014,” Moody’s said in their report titled 2015 Outlook – Global Credit Conditions.

The American agency said the country has benefited from a strong domestic demand base and diversified export markets that cushion it from the effects of a slowing Chinese economy and sluggish growth in Europe and Japan.

“Employment and consumption are likely to rise in India, and the fall in global commodity prices will help to lower high inflation in the country,” it added.

Growth in the earlier two consecutive fiscals has fallen below the 5 percent level.

“Our outlook for the Indian banking system remains negative, reflecting high leverage in the corporate sector that will inhibit any meaningful recovery in asset quality, notwithstanding a moderate rebound in economic growth,” the report said.

The percentage of gross non-performing assets (GNPAs) for the banking sector is expected to worsen from 3.9 percent of advances in fiscal 2013-14 to about 4-4.2 percent in 2014-15, ICRA has said in a report earlier.