Governor E.S.L. Narasimhan administered the oath to Naidu near Guntur town in the presence of tens of thousands of people. 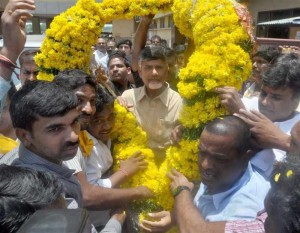 A total of 19 ministers took oath along with Naidu. Two of them – K.E. Krishna Murthy and Chinnarajappa – will be deputy chief ministers.

There was utter chaos at the venue, with police repeatedly using force to control the crowd.

During the poll campaign, Naidu promised to have two deputy chief ministers from the backward class and Kapu communities.

The TDP has given two cabinet berths to its ally, the Bharatiya Janata Party (BJP).

K. Srinivas and Manikyala Rao are the representatives from the BJP.

P. Narayana, who runs Narayana Group of educational institutions, is the surprise choice as he is not a member of either house of the state legislature.

Naidu will be the first chief minister of residual Andhra Pradesh after the separate Telangana state was carved out June 2.

The 64-year-old earlier served as the chief minister of undivided Andhra Pradesh from 1995 to 2004. He was leader of opposition for nearly a decade.