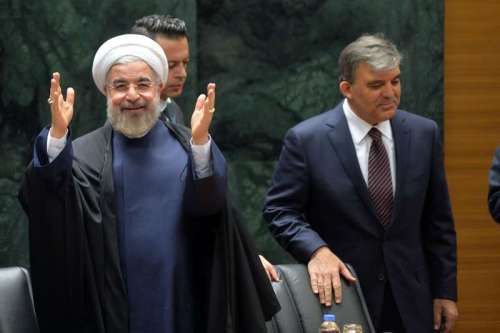 Iranian Deputy Minister for Legal and International Affairs Abbas Araqchi said Saturday that there are no plans for a meeting between President Hassan Rouhani and his American counterpart Barack Obama during the ongoing 69th UN General Assembly session in New York.

Araqchi said that nuclear enrichment is a key issue in the ongoing talks with the six world powers on Iran’s nuclear programe, adding that lifting the sanctions is another important issue to be addressed, given the fact that all sanctions have to be removed completely, IRNA reported.

Araqchi said that Iran has had no talks with the US on anything but the nuclear issue.

Meanwhile, Iranian Foreign Minister Mohammad Javad Zarif Friday said that Tehran and the P5+1 group or the five permanent members of the UN Security Council — the US, Russia, China, France and Britain plus Germany — could reach a final nuclear agreement before the Nov 24 deadline.

The seventh round of talks between Iran and the P5+1 group over Tehran’s nuclear energy programme started Wednesday in New York, with Zarif hosting a working lunch with the European Union (EU) foreign policy chief Catherine Ashton.

Last November, Tehran and the P5+1 signed an interim deal in Geneva, which came into effect Jan 20 and expired six months later.

In July, Iran and the six countries agreed to extend negotiations until Nov 24 after they failed to reach common ground on a number of key issues.