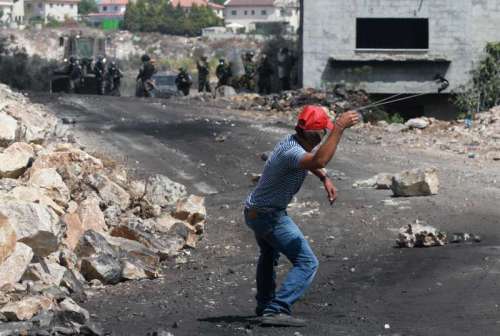 Hundreds of Israeli Arabs  protested across the country in a second day of clashes with the police over a video footage showing Arab youth being shot at while retreating from the police.

Dozens of masked protesters set tires on fire and hurled stones at the police near the northern village of Kafr Kana, where policemen shot and killed Saturday Khair Hamdan, a 22-year-old Arab citizen of Israel, after he attempted to attack a police car with a knife, Xinhua reported.

Twenty protesters were arrested in suspicion of “hurling stones and rioting”, a police spokesperson said in a statement.

Meanwhile, Israel’s Ynets news website reported that dozens of Arab students and supporters protested in the universities of Tel Aviv and Haifa, where they waved Palestinian flags and posters that read “Israel is a terror state.”

The incident stirred the Arab public in the country, some 1.6 million people that is about 20 percent of the Israeli population.

Prime Minister Benjamin Netanyahu backed the police and lashed out at the demonstrations, saying they are “incited by Hamas and the Islamic movement in Israel.”

Prime Minister Benjamin Netanyahu said  Israel would not tolerate rallies in Arab townships in which protesters publicly call for the nation’s destruction, threatening to use force against lawbreakers.

“We are not prepared to tolerate demonstrations in the heart of our cities in which Hamas or IS flags are waved and calls are made to redeem Palestine with blood and fire, calling in effect for the destruction of Israel,” Xinhua quoted Netanyahu as telling ministers at the start of the weekly cabinet meeting.

The remarks came a day after police shot dead 22-year-old Khayr al-Din al-Hamdan in the northern Galilee village of Kafr Kana. The man reportedly assaulted police with a knife, sparking an outrage that saw thousands of its residents taking to the streets to clash with security forces.

Footage from a security camera showed the assailant attempting to smash the windows of a police vehicle with a sharp object and then fleeing. It remained unclear, however, whether warning shots had been fired in the air before he was shot and fatally wounded, according to police officers’ version of the incident.

Israeli Arabs have called on a one-day general strike to protest the shooting, and further demonstrations were planned to take place at university campuses across the country Sunday.

At the cabinet meeting, Netanyahu said the Palestinian Authority, Hamas and radical Islamic movements were to blame for the violence sweeping Israel.