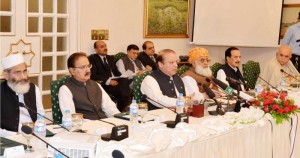 Pakistan expectedly raked up the Kashmir issue in the UN General Assembly with its Prime Minister Nawaz Sharif saying the “core issue” of Jammu and Kashmir has to be resolved and pushed for a plebiscite in the state.

Addressing the UNGA, as Indian Prime Minister Narendra Modi arrived in New York, Sharif said that people of Jammu and Kashmir are “still waiting for fulfilment of the promise of plebiscite”.

Sharif, whose own political existence is under threat with two long-running protest sit-ins in Islamabad demanding that his ouster, said the “core issue of Jammu and Kashmir has to be resolved.

“This is the responsibility of the international community.. We cannot draw a veil over the issue of Jammu and Kashmir,” he said.

Sharif alleged that “many generations of Kashmiris have lived in violence” and that the people of the state had suffered, especially its women.

He said he was “disappointed with cancellation of talks by India”, adding that “we lost an opportunity”.

India had called off the Aug 25 foreign secretary level talks with Pakistan over its envoy in New Delhi hobnobbing with Kashmiri separatists, ignoring India’s request to him not to meet them.