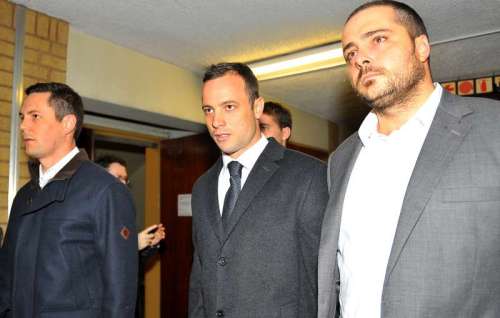 South African Paralympian Oscar Pistorius arrived  at the High Court in Pretoria for the final sentencing on charges for killing his girlfriend Reeva Steenkamp.

Pistorius is on trial for fatally shooting Stenkamp through a locked toilet door Feb 14, 2013, at his house in Pretoria.

On Sep 11, Judge Thokosile Masipa of the high court in Pretoria found Pistorius not guilty of premeditated murder or murder. He was also acquitted of charges of illegal possession of ammunition and one charge of illegal discharge of a firearm in a public place.

But Sep 12, he was found guilty of culpable homicide and the illegal discharge of a firearm in a restaurant in Johannesburg in January, 2013.

The state will argue in the Pretoria High Court that Pistorius must get the maximum sentence for culpable homicide, Independent Online reported citing the National Prosecuting Authority said.

“Our duty is to make sure. We ask for the harshest sentence possible,” spokesman Nathi Mncube said outside court.

He said the State would argue for a sentence that fits the severity of the crime.

“The minimum sentence act does not apply to culpable homicide, so there is no minimum or maximum sentence. It can vary from a suspended sentence to a fine to imprisonment. Only the judge can decide.”