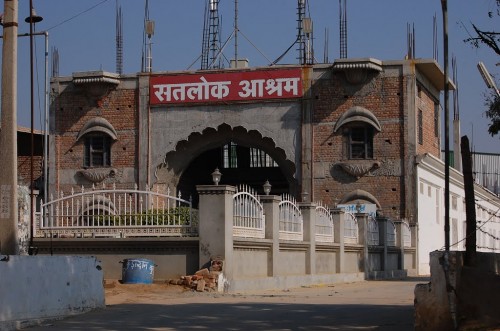 Several people were injured as followers of controversial sect leader Rampal clashed with the police outside his Satlok Ashram in Haryana’s Hisar district.

Smoke could be seen coming out from the roof of the ashram complex where a large number of sect followers are holed up along with Rampal.

Police fired tear gas and used water cannons against the hundreds of determined followers of the self-styled godman as the police moved closer to the ashram to get inside and arrest Rampal.

Security personnel transported some of the injured, including media persons, in ambulances to nearby Barwala town.

Police sources said that over 20,000 security personnel, including the Central Reserve Police Force (CRPF), Rapid Action Force (RAF) and Haryana Police, had surrounded the ashram complex, which is spread in over 12 acres of land.

Hundreds of Rampal followers, including women and children, have been camping outside his ashram, 210 km from here, for nearly a fortnight to prevent security forces from entering the complex to arrest Rampal.

The sect leader has been avoiding arrest and has failed to appear before the Punjab and Haryana high Court although non-bailable warrants have been issued against him Nov 5.

The controversial sect leader’s followers had indulged in vandalism in a court in Hisar in July this year when Rampal was going there in connection with a 2006 murder conspiracy case.

The high court took suo moto notice of the Hisar incident and summoned Rampal to appear before it.