From a “sagar mala” or a chain on the sea, connecting India’s ports and then the hinterland, to an enabling groundwork for cheaper air travel to small cities, President Pranab Mukherjee on Monday outlined a slew of projects to show the thrust the Narendra Modi government wishes to give to infrastructure development. 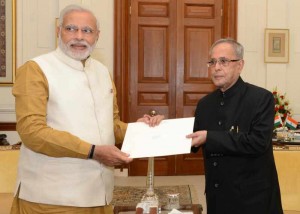 “Lack of robust infrastructure is one of India’s major impediments,” the president said during the course of his 55-minute address to the joint session of the two houses of parliament in the Central Hall.

“The government will chalk out an ambitious infrastructure development programme to be implemented in the next 10 years. A fast-track, investment friendly and predictable public-private-paertnership mechanism will be put in place,” he assured.

He added that the government will also liberalise FDI (foreign direct investment) in defence production.

“With available human resources, India can emerge as global platform for defence,” he said.

Mukherjee also said the armed forces will be modernised and manpower shortages addressed on priority.

A national maritime authority will also be set up.

“River Ganga is a part of our rich cultural heritage, a symbol of faith and the lifeline for millions,” Mukherjee said while addressing the joint session of both houses of parliament.

“However, Ganga continues to remain polluted with many stretches of the river becoming dry in lean season. My government will take all necessary steps to ensure a perennial, clean and pristine Ganga,” Mukherjee said.

Mukherjee also said that conservation of the Himalayas is also a priority area.

“Conservation of Himalayan ecology will be a priority area for my government. A National Mission on Himalayas will be launched,” he added.

Outlining the Narendra Modi government’s agenda, Mukherjee said: “Agriculture is the source of livelihood for majority of our people. In the recent past, our farmers have been under severe stress with hopelessness driving some of them to suicides. My government is committed to reversing this unfortunate trend.”

“It will increase investment in agriculture, both public and private, especially in Agri-infrastructure. Steps will be taken to convert farming into a profitable venture through scientific practices and Agro-technology,” the president said as he addressed the joint session of both houses of parliament here.

India has 35.2 percent agricultural land under irrigation in 2008, according to World Bank.

“By the time the nation completes 75 years of its independence, every family will have a pucca house with water connection, toilet facilities, 24×7 electricity supply and access,” Mukherjee said while addressing the joint sitting of both houses of parliament.

He said that soon 50 percent of our population would be residing in urban areas, so government will build 100 cities with world class amenities.

“My government is conscious of the fact that our urban infrastructure is under severe stress. Soon, 50 per cent of our population would be residing in urban areas. Taking urbanization as an opportunity rather than a challenge, the government will build 100 cities focussed on specialized domains and equipped with world class amenities,” he said as he outlined the Narendra Modi government agenda.

He said that the government will roll out integrated infrastructure in model towns with focus on “cleanliness” and “sanitation”.

Among the projects and policies he listed were:

– Expansion of railways in hilly states and northeast region

– Inland and coastal waterways for use as major transport routes

– Connect households and industries with gas-grids

– Integrated infrastructure with focus on cleanliness and sanitation

– Modernalisation of existing ports and development new world class ones.