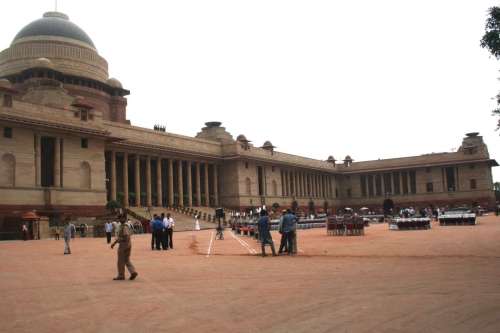 A high-tech story-telling destination of modern times, with a glass dome in the centre and pristine white imperial design conforming to the existing architectural grandeur is how Rashtrapati Bhavan’s new museum will look like.

President Pranab Mukherjee  laid the foundation stone of “Rashtrapati Bhavan Museum Phase II” at the President’s Estate where he talked about how the new building would pave way to a world-class museum that will have stories about historic associations of this estate.

“The 10,000 square metres space will be conceived in the form of a high-tech museum that will house precious collections, multiple-screens and holographic projections among other important things,” Mukherjee said at a conference here.

Elaborating on this new project that is expected to be completed in two years, Omita Paul, secretary to the president, said: “The new museum will preserve historic documents and socio-economic and political events associated with Rashtrapati Bhavan.”

She added: “The state-of-the-art techniques and augmented realities will be used in this museum to meet current trends.”

The new museum will document life and times of Indian presidents through gifts, photos and other things that have been lying in dust.

The Delhi Urban Arts Commission and Heritage Conservation Committee has approved the project.

Also present at the event was Urban Development Minister M. Venkaiah Naidu, who said the museum will “carry message of history and past to the future generations”.

He said: “No nation can afford to forget its own history and culture.”

The new museum will have four elevators, two escalators and a glass dome in the middle to allow natural light to filter through into the premises.

This project is a part of Mukherjee’s vision to make “his presidency, people’s presidency” and open its treasures to the people.

The first phase of the project was launched July 25, 2014, when the building – what used to be stables and a coach house used by the British rulers – was turned into a museum.