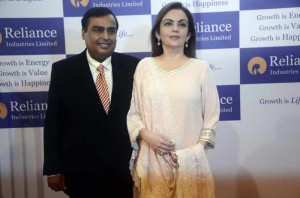 Reflecting its growing appetite to pursue hydrocarbon assets outside India, Reliance Industries has inked a global pact with Mexico’s state-run Pemex to explore oil and gas, even as the North American nation gears for a major international bidding round next year.

“As per the memorandum of understanding, Reliance will cooperate with Pemex for the assessment of potential upstream oil and gas business opportunities in Mexico, and jointly evaluate value added opportunities in international markets,” a company statement said.

The pact, signed by Reliance executive director P.M.S. Prasad in New York, also calls for sharing the Indian company’s expertise in extracting shale gas in the US, as also in the deepwater blocks of eastern India, notably the Krishna-Godavari basin.

“Reliance Industries will also provide technical support and share its experience with Pemex for refining value maximisation and other technical optimization strategies,” the added.

“Reliance cooperation with Pemex is in line with the growth strategy to explore opportunities to expand its international asset base in regimes having an internationally attractive competitive terms,” it said.

“The company hopes to leverage its organisational capabilities and expertise to create long-term value for exploration and production business and for Reliance Industries on the whole.”

Mexico is already a major oil producing nation and its recent energy reforms are seen as offering close to 30 billion barrels of deepwater reserves, around its borders with the US in the Gulf of Mexico, for global competitive bidding, sources said.

The country ranks 10th globally in crude il production and 18th in natural gas, according to the US Energy Information Administration. But its oil output has been declining in recent years, as has its position as a net oil exporter to the US.

The Mexican government, accordingly, wants to attract foreign investment to ramp up production, which currently stands at around 2.5 million barrels per day and hopes to draw some $50 billion over the next few years.

For Reliance, this marks yet another opportunity outside India as it has had a bad patch in the domestic oil sector in recent years with a host of litigations and arbitration proceedings over issues such as ascertaining exploration costs, low production and delays in fixing prices.

According to sources, out of the 45 blocks that the company had acquired during various rounds of global bidding invited by the government, as many as 38 have been surrendered despite claiming an expenditure of little over $2 billion.

“The management has taken a serious decision. It doesn’t want drown itself in the disappointments within India in the past few years. The idea: Look at opportunities overseas. But this doesn’t mean it will let go its legitimate interests in India,” a source in the know of matters added.

The example being followed is of its success with shale gas in the US.

Reliance has managed to derive far better returns, in terms of money invested, from its shale gas venture in the US, than in India. This, despite the sharp drop in the prices of this hydrocarbon being supplied to the Henry Hub pipeline in the US that criss-crosses nine states.