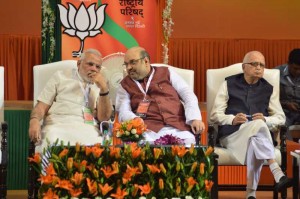 Recent by-election reverses for the BJP are early intimations of mortality for the Narendra Modi-Amit Shah duet. As a senior BJP leader whispered: “They must come down to earth.” In other words, a degree of realism may now be introduced into the proceedings.

The May parliamentary elections were peculiar in some ways. The outcome was expected and yet the scale of the BJP victory was something of a shock.

What magic potion was administered to all senior leaders of the BJP (except Arun Jaitley and Rajnath Singh) at the Goa conclave of the party in June 2013, remains a mystery to this day. They first threw a fit at Modi’s candidature but were soon miraculously tamed.

Began one of the world’s most comprehensive 24X7 media campaigns to market a prime minister. The campaign was sustained at a frenetic pitch for a full year. With his unbelievable reserves of energy, Modi kept pace.

Did this advertising blitz alone overwhelm the electorate? There were other reasons.
The campaign for Modi gathered force in geometrical progression because of the electorate’s profound disgust with the incumbent Congress, prime minister Manmohan Singh, and, above all, the Gandhi family.

Natwar Singh has in his memoirs corrected a story circulated by the coterie around Sonia Gandhi that she refused the prime ministership after the 2004 elections because of an “inner voice”. According to Natwar, it was Rahul Gandhi who stopped his mother from accepting the job.

After the assassinations of Indira Gandhi and Rajiv Gandhi, it was understandable that both, Rahul and Priyanka Gandhi should stop their mother from taking any risks.

What was annoying, however, was the pretense the family maintained about Rahul Gandhi as the future prime minister. He was simply not interested.

If the Gandhi siblings were anxious not to expose their mother to any peril, would Sonia Gandhi allow her son to take such a risk? Neither Sonia Gandhi nor Rahul ever clarified that the Congress vice president would ever be a prime ministerial candidate. And yet they would not encourage an alternative leadership to evolve. Exasperated Congressmen privately seethed with rage.

In 1985, a year after Indira Gandhi’s assassination, Mikhail Gorbachev emerged as the reformist leader of the Soviet Union. After Rajiv Gandhi’s visit to Moscow and Gorbachev’s return visit to New Delhi, T.N. Kaul, ambassador to Moscow, floated an idea that both Rahul and Priyanka, teenagers then, would be safer in Moscow while the Punjab insurgency lasted.

The point is that the entire Gandhi family had very understandable concerns about personal security after Indira Gandhi’s murder. This turned to paranoia after Rajiv’s murder in 1991.

It would have made perfect sense for the family to concern themselves with Congress party affairs, and promote an alternative leadership for electoral politics.

Instead, the family pretended to be interested in the top job for Rahul without any inner conviction that Rahul was upto it both, for want of ability and, ofcourse, for personal security concerns.

This confusion at the top created by the Gandhi family combined with the governance deficit of the Manmohan Singh apparatus, to give Modi an unbridled electoral advantage.

Communal polarization as a vote generator was identified fairly early, particularly in UP. In fact, after the Faizabad riots over a year ago, Yogi Adityanath had given notice:

“UP ab Gujarat banega
Faizabad shuruaat kare ga”
(UP will now be like Gujarat,
and Faizabad will the starting point)

Modi had thus far largely dwelt on a development theme but the mega riot in Muzaffarnagar provided the Hindutva foot soldiers with a communal torch to carry from constituency to constituency in UP and beyond.

These, then, were the ingredients which brought Modi to power – an unprecedented media campaign; universal disgust with the Gandhi family; promise of development on the Gujarat model; carefully choreographed communalism to polarize votes with Congress and Mulayam Singh cast as “Muslim appeasers”; a clever system of splitting Muslim votes.

Each one of these ingredients were missing in the recent by elections. For instance, there is no Muslim population to polarize against in, say, Uttarakhand. There was no corporate backed media blitz. The Congress, particularly the Gandhis, are now too diminished to work as a “hated” foil. People feel they have been short changed with promises of “achche din” which have receded. Nitish Kumar and Lalu Yadav combined in Bihar as did Mulayam Singh Yadav with Mayawati, the latter by not contesting. And “Love Jihad” simply did not look like a credible allegation against a battered and bruised community.

Above all, the voter recoiled on intemperate speech and rank bad manners on the part of Yogi Adityanath, Sakshi Maharaj and their cohorts.