A massive search operation to locate the remaining 19 of the 24 students and a tour operator who went missing after strong currents of Beas river washed them away near Mandi town entered the third day Wednesday, officials said. 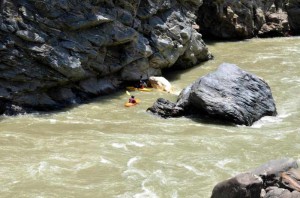 Five bodies have been recovered so far.

Officials said chances of recovering any survivor of the tragedy that struck Sunday evening was bleak.

Jaideep Singh, commanding officer of the National Disaster Response Force (NDRF), told IANS: “A massive search operation is on the river stretch from the accident spot to the Pandoh dam.”

The army has also deployed a team of 18 divers.

Singh said, “It seemed that most of the bodies are either trapped under the boulders or sank in the silt.

“There are few chances of bodies flowing beyond the Pandoh dam. We are regulating the outflow from the dam and expect that the swollen bodies may start surfacing tomorrow (Thursday) or day after (Friday),” he added.

The body of the fifth victim Devashish Bose was flown to Hyderabad Tuesday evening.

More than 60 students and faculty members of the V.N.R. Vignana Jyothi Institute of Engineering and Technology in Hyderabad were on an excursion to Manali.

Some of them were getting themselves photographed on the bank of the river Sunday evening when a wall of water washed them away.

“The river level suddenly increased due to release of water from the Larji hydropower project dam, located near the accident spot, without warning,” witnesses said.

The government has ordered and inquiry into the incident and action would be taken against those found negligent in the incident.

Telangana Home Minister Nayani Narasimha Reddy was camping in Mandi for the third day along with parents and families of the missing students.

The accident spot is located some 200 km from Shimla and on the border of Kullu and Mandi districts.