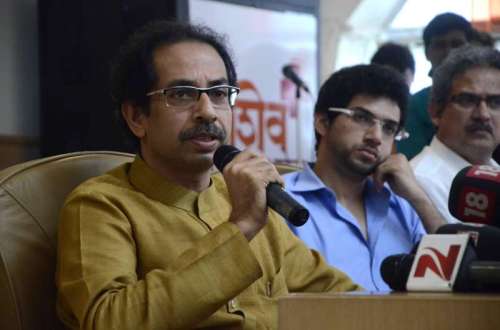 A day after Prime Minister Narendra Modi said he won’t criticise the Shiv Sena out of respect for its founder Bal Thackeray, the Sena Monday hit back, saying the “real tribute” to the late Thackeray would have been to continue with the BJP-Sena alliance.

“We are happy to learn that he (Modi) has respect for Balasaheb in his heart… Then why did the Bharatiya Janata Party broke the 25-year-old alliance in Maharashtra?” the Sena asked in an editorial in its mouthpiece “Saamana”.

It said the strong ties built on Hindutva started by Bal Thackeray were snapped only on the issue of seat sharing in the Maharashtra assembly elections.

“Where was your respect for Balasaheb when the BJP broke the alliance? If the BJP had shown maturity by keeping the alliance intact, that would (have been) the genuine tribute for Balasaheb,” it said.

The Sena also took potshots at BJP leaders for proclaiming their love for Chhatrapati Shivaji though they had never celebrated his anniversary once in their lifetime.

“This is a sheer insult, and even Chhatrapati Shivaji’s soul must be getting distressed in Raigad Fort (the site of his Samadhi memorial),” the Sena said.

The Sena also took umbrage at Gujarat Chief Minister Anandiben Patel’s invitation to businesses in Maharashtra to shift to Gujarat.

“The Congress-NCP looted Maharashtra… The BJP is casting a covetous eye on Maharashtra’s resources… Such a statement (by Patel) also tantamounts to looting.

“The people of the state are well aware of the hidden looters who speak one thing and do another,” the editorial said.

Suggesting a conspiracy to divide Maharashtra, the Shiv Sena asked why no BJP leaders had spoken on the subject.

“The BJP is trying to break it (the state) by creating Vidarbha… Why has not Modi even once in Mumbai or Maharashtra said the state will not be split?”

It warned – what the Congress did not dare to do and earlier Morarji Desai could not achieve — that the BJP, “which backstabbed us by breaking the alliance”, is hell bent on breaking Maharashtra.

The party also reiterated its objections to Modi’s proposed 20 public rallies in the state for the Oct 15 polls.

“The Congress-NCP has destroyed Maharasthra… He need not waste his time as prime minister to come and inform us all this in the blazing heat.”