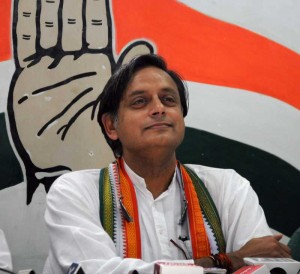 Lok Sabha MP Shashi Tharoor was Monday sacked from the post of Congress spokesperson, a statement from the party said here.

“Congress President Sonia Gandhi has accepted recommendation of AICC (All India Congress Committee) disciplinary committee to remove Shashi Tharoor from the list of spokespersons of the AICC with immediate effect,” it said.

Tharoor, a Lok Sabha member from Thiruvananthapuram constituency, was a union minister in the erstwhile Congress-led United Progressive Alliance government.

The two-time Thiruvananthapuram Lok Sabha member Shashi Tharoor  become a loner in his party because not a single party leader has come to his defence after he accepted Prime Minister Narendra Modi’s invitation to join the Clean India campaign, saying he was honoured.

“Across the party there has been a feeling that he has crossed the line and now it’s for the Congress president here to take stock of it and do the needful,” said Padmaja Venugopal, daughter of K. Karunakaran, and added that what he said has not been accepted by the party and its members here.

Since Tharoor is an AICC member and one of the many party spokesperson, any action will have to come from the national leadership.

An article in party mouthpiece ‘Veekshenem’ Tuesday, without mentioning Tharoor, clearly said that such acts were not acceptable, irrespective of the status ‘one’ enjoyed.

Tharoor Monday said that his fundamental commitment was to India’s progress, and that he remained convinced that the Congress party was the best and most inclusive vehicle to accomplish that progress.

In the faction-ridden Congress party in Kerala, it’s perhaps for the first time that one party leader and that too a ‘powerful’ Lok Sabha member is fighting his own battle, with not even a single leader coming to his defence.

Ever since Tharoor was handpicked by Manmohan Singh, Sonia Gandhi and Rahul Gandhi in 2009 to contest from the Thiruvananthapuram Lok sabha constituency, leaders cutting across factions appeared miffed that he crashlanded in their domain.

To placate his detractors, Tharoor Tuesday tweeted: “as my #GandhiTweets indicate, the Mahatma stood not only for physical cleanliness but for cleanliness of mind, heart, soul, spirit. I therefore urge @PMOIndia to also work for an India cleansed of bigotry, hatred, intolerance & divisiveness, an India that is truly clean.”