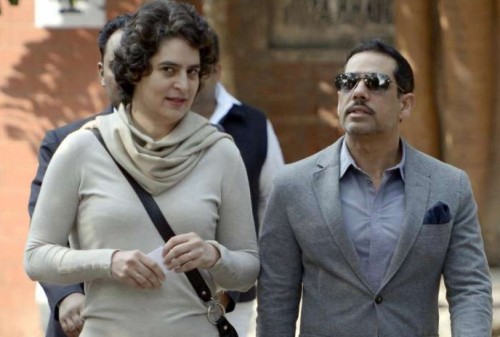 As the Bharatiya Janata Party (BJP) denounced Vadra and the Aam Aadmi Party (AAP) accused the Gandhi family of “arrogance”, the Congress came to the defence of one who it otherwise said was a private citizen.

Congress sources said Gandhi spent nearly half hour at the Lodhi Estate residence of her daughter and son-in-law but details what they may have discussed were not known.

On Saturday, a visibly angry Vadra snapped at a TV crew when he was asked about his controversial land deals in Haryana.

Vadras thrice asked the reporter “Are you serious?” and once “Are you nuts?” before pushing away the journalist’s microphone and calling him an “idiot”. He then walked away, followed by his guards.

BJP spokesman Sambit Patra said: “It was the sheer frustration of Robert Vadra that became manifested as an inappropriate behaviour on a journalist.

“Vadra was the one who had called India a Banana Republic and we Indians as mango people. It is time we make him realise that India is no more a Banana Republic which was ruled by the first family of the Congress.”

Congress spokesman Randeep Surjewala chided the journalist for not giving “personal space and liberty” to a person “neither in public nor (holding) any public office”.

“Unpleasantness of repeatedly asking questions at private functions, like what happened with Robert Vadra, must be avoided at all times,” he said.

Surjewala said that on numerous occasions “fringe elements affiliated to the BJP-RSS-Shiv Sena have attacked news media offices in Delhi and Mumbai without any reason or provocation”.

Another BJP leader, Shahnawaz Hussain, said Vadra was not a private person.

AAP leader Yogendra Yadav said Vadra’s snapping showed the Gandhi family’s “arrogance was in tact” and “they needed to be taught more lessons”.

The new BJP government in Haryana has announced Vadra’s land deals will be probed.