Tuan M Zameer looks in to the affairs of an ethnic minority which is largely unknown and left un-noticed in Sri Lanka –  the Lankan Telugus, popularly known as ‘Snake Charmers’

Sri Lanka is a land which is world renowned for its rich history, mouth-watering cuisine, awe inspiring nature, scintillating beaches and friendly locals. The Colonial Era opened the door ways for the settlement of different ethnic groups, and at present they form the multi-cultural fabric of the nation. The minorities that claim Indian origin includes, Borahs, Khojas, Memons, Ceylon Chettys, Bharadhas, Parsees, Indian Moor, Malabaris and Indian Tamils. However, an ethnic minority which is largely unknown and left un-noticed in Sri Lanka is the Lankan Telugus,  popularly known as ‘Snake Charmers’.

They are known by several other names and those who had settled down in Alikambai who live by agriculture are referred to as ‘Kuravar’.  Formerly the Kuruvars lived a hunter-gatherer lifestyle and their male-folk were either hunters or gypsies and their female members are sooth-sayers by profession. Though these people were once classified as outcastes or untouchables but since recent past, they enjoy much freedom and have received greater acceptance in the Lankan society. The Sinhalese use the term ‘ahikuntika’ to refer the Telugu Speakers of the country derived from the words ahi (serpent) and tunda (mouth) meaning those who play with the mouth of the serpent. 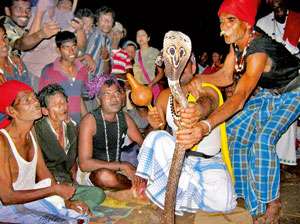 These gypsy clans have established their permanent settlements in the North, East and Central parts of Sri-Lanka and they are found concentrated in villages like Kudagama, Kalawewa, Aligambe, Kiriwallapuram and Andarabedda and along the banks of Rajangana tank in Anuradhapura .Kudagama is home to hundred and seventy Telugu speaking families and Puttalam city on the west central coast of Sri Lanka is reported to have an estimated number of two hundred Telugu speaking families who work in salterns and also engaged in other professions.The language which they speak is not intelligible to those outside their clan, and the recent study has confirmed that they speak a dialect of Telugu and their long stay in Sri Lanka has eventually led to a ‘Creole’ influenced heavily by native languages like Sinhala and Tamil.

The distinctive features such as long vowels, heavy nasalisation seen when speaking help distinguish the Telugus from the rest of the locals. The close interaction with the locals has made the Telugu speaking gypsies an inseparable entity and their unique rituals, culture and traditions are gradually losing its hold in the community. It is worthy of mention that none of these Telugu’s can either write or read the Telugu alphabet.

They share a lot in common with the Sinhalese, their language, physiognomy, style of dressing and rituals such as ‘dana’ where food is cooked immediately after the burial of the dead relative/friend and served as an offering to those who live in the neighbourhood show close resemblance to the Sinhala ‘Dana’. They are adherents of different religions, and the majority claim that they are believes of Theravada Buddhism, while others observe Hinduism, Christianity and some forms of Tribal practices such as snake worship. The Puttalam Telugus are Christians by faith and those who reside in Kudagama are either Buddhist or Hindus.

The exact period of their advent remains blurry, but the stories concerning their stay has been recorded even during the days of the Kings .The history suggests that their antecedents to Ceylon might have commenced during the reign of Nayakkar Waduga Rajas in Sri Lanka. As the Nayakkars themselves were Telugu speaking Buddhist Kings who hailed from Andhra Pradesh, India who reigned over the nation for nearly four centuries.  However, the members of this semi-nomadic clan suggest that their forefathers settled down in Lanka way back in the second century AD yet there are no recorded evidences that helps affirm their claim. Likewise, their exact number remains largely unknown even to this day.

They are highly skilled people, who are capable of making venomous snakes dance to their soothing tunes and the fiercest and the world’s largest venomous snake, the King Cobra is their best known species of choice. Some fearless snake charmers play out life threatening acts such as kissing the Cobra on the lips, playing with them and share a special bond with such deadly creatures. But the present generation Telugus seem to have lost interest in their ancestral livelihood and are found engaged in agriculture and are forced into unskilled labour while some continue to train monkeys to perform tricks and jugglery.

The Puttalam Telugus are either engaged in small scale trade or work in salters while the Kudagama Telugus depend on Agriculture and hunting. The reason why many opt for other professions is also because the wild life authority has banned activities such as ‘snake catching’ as it is against the regulations imposed by the Government. It is pity to note that the Telugus who were engaged in hunting have now assimilated into the Tamil Veddha clans found scattered in the North and East Coast, and the frequent intermarriages with other communities has led them to a state of endangerment. The elderly members of the clan report that marriages within the same tribe and cousin marriages were often seen in the bygone generations but are hardly seen in the present generation. Unlike the typical Telugu patronymics like Reddy, Garu, Naidu etc. the Telugus in Sri Lanka use either Sinhala Buddhist names or Christian/ Catholic names and do not carry surnames.

At present one could recognise a Telugu from their forms of dressing especially the male-folk who usually clad in a printed ‘Sarong’ wrapped tightly around their waist, though many prefer being bare-chested  while some wear their banyan or vests. The distinctive feature is their colourful long beads chains wrapped repeatedly around their necks, and they chose to wrap a turban around their heads and are spotted carrying a metal tin/can attached to a long loop which they carry in the form of shoulder bags. These tins are used as spittoons. The women carry their long cascades in the form of ‘konde’ where they pile up their hair to form a tight hair bun held strong with long pins and ekels. They usually clad in Saris, specifically those with large flower patters on it with wide range of colours like their Dravidian sisters in South India.  However, the youngsters are found clad in Sinhala frocks and trousers and other European influenced clothes.

They live as groups in small huts built from mud and straw and most of them live below poverty line and are found stuck in the lowest rung of the economy ladder. It is believed that poverty will eventually make them lose their identity, traditions, culture, ancient practices and means of living and they will eventually end up being categorised as Sinhalese and at present many identify themselves as Sinhalese or Tamil. It is evident that the future of gypsies and snake charmers in the country remains uncertain, but the Telugus who have made Sri Lanka their foster home form an important segment of the country. They have without an iota of doubt stamped their very own identity in Sri Lanka and they continue to serve much significance in forming the nation’s multicultural mosaic.