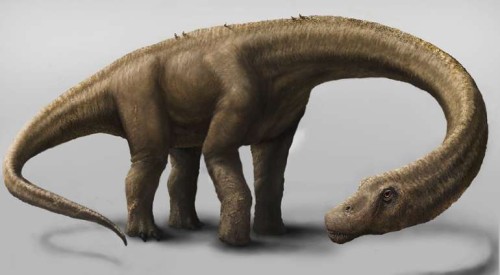 At 85-feet long and weighing about 65 tonnes, scientists have discovered a new supermassive dinosaur species with the most complete skeleton ever found of its type.

Found in southern Patagonia in Argentina, Dreadnoughtus schrani is the largest land animal for which a body mass can be accurately calculated.

“It weighed as much as a dozen African elephants or more than seven T rex. Shockingly, skeletal evidence shows that when this 65-ton specimen died, it was not yet full grown,” said Kenneth Lacovara, an associate professor in Philadelphia-based Drexel University’s college of arts and sciences.

The new dinosaur belongs to a group of large plant eaters known as titanosaurs.

Its skeleton is exceptionally complete, with over 70 percent of the bones, excluding the head, represented.

“It is by far the best example we have of any of the most giant creatures to ever walk the planet,” Lacovara added.

Because all previously discovered super-massive dinosaurs are known only from relatively fragmentary remains, Dreadnoughtus offers an unprecedented window into the anatomy and biomechanics of the largest animals to ever walk the Earth.

The discovery was detailed in the journal Scientific Reports.