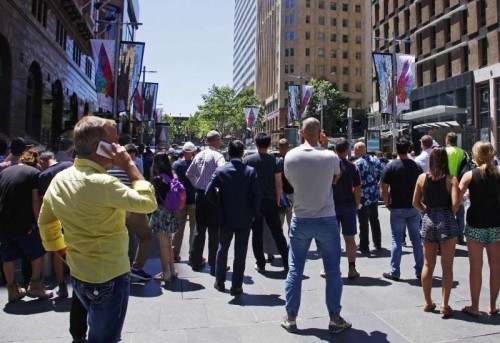 An armed man, who Monday took over 30 people hostage inside a cafe in Sydney’s central business district, has demanded police provide an Islamic State (IS) flag to him and also said that he wanted to talk to Australian Prime Minister Tony Abbott.

The Lindt Chocolat Cafe hostage taker has requested for an IS flag, Sydney Morning Herald reported citing a Muslim community leader as saying.

“The man inside the café said that if police could get him an IS flag, then he would release some hostages,” said the leader.

Possession of the IS flag is illegal in Australia.

“A contact I know from Counter Terrorism phoned me four or five times Monday asking if I could find them an IS flag, in a hurry. At one stage I had a team of people trying to find one,” the leader said.

After receiving the calls, the community leader rang everyone she knew.

“I must have called 50 people trying to find an IS flag. I found plenty of people who had one, but they didn’t want to give them up. They also believed that the police were trying set them up.” the leader said.

The leader said that the request might indicate the gunman wished to be seen as part of the IS.

“Or it could mean that he could be from Jabhat Al-Nusra, which hates IS, and he might want to burn that IS flag to make a statement,” the source said.

According to reports, the gunman also wanted to talk to Prime Minister Abbott.

The hostages were seen standing with their hands up at the windows of the Lindt Chocolate Cafe in Martin Place. There was also a black and white flag, believed to be a jihadi flag, being held up on a window.

Five hostages managed to flee, police said and added that nobody was harmed till now.

Abbott called for calm as security personnel tried feverishly to tackle the siege.